YSUscape teamed up with the Youngstown Neighborhood Development Corporation for their fourth annual Make a Difference Workday.

On Saturday, over 20 volunteers cleaned vacant houses, boarded windows and trimmed hedges in a Youngstown neighborhood. Volunteers cleaned houses on Norwood and Crandall on the city’s North Side. 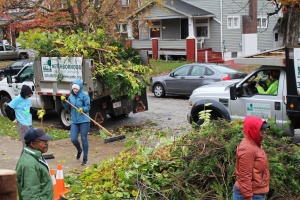 Daniel Bancroft, president of YSUscape, said they were originally going to have four areas for the workday, but cancelled two areas due to the rain.

Bancroft said they cut down trees, picked up tires that might be outside on the property and scraped sidewalks.

Volunteers helped to pick up trash and clean up brush.

“Another large focus we have is on public art and implementing that throughout the city of Youngstown,” Bancroft said. “Another project we’re currently working on is installing vinyl artwork onto utility boxes in the downtown area and up along Wick Avenue.”

Bancroft said the artwork should be up in the next month or so.

Anika Jacobs-Green, the neighborhood organizer for YNDC, said one of the main reasons for cleaning up neighborhoods in Youngstown is to improve the quality of life.

“It brings back a sense of pride and safety and gives residents more control of their neighborhoods and, of course, there’s less crime,” Green said.

Green said crime has gone down in some areas after fixing the neighborhoods.

“We’re actually working in a high crime area on the South Side, which our biggest hope is to fix it up,” he said. “We actually hired people to work specifically in that area and we hope when we cleanup we deter crime.”

Green said volunteers reclaimed sidewalks and boarded-up houses to make sure no people are hiding out in them.

He said volunteering is important for everyone and it is a great networking and learning experience.

“The skills are transferrable that volunteers will learn and it’s giving back to the community. Taking care of where you’re at and it feels good,” Green said.

Stephen Premec, a YSU student, has been volunteering help to clean up homes in Youngstown since he was 12 years old.

Premac said he liked joining YNDC because he is able to help revitalize Youngstown and make the community look better.

“Every time I would come down with my brother, I would see house after house. It just looked terrible,” he said.

Premec said many times neighbors have come out and pitched in with the cleaning up. He said even though he feels sore afterwards he still goes out the next day regardless and volunteers.

“It feels rewarding mentally, but physically you’re just so tired after. But the mental reward is bigger than anything else,” he said.