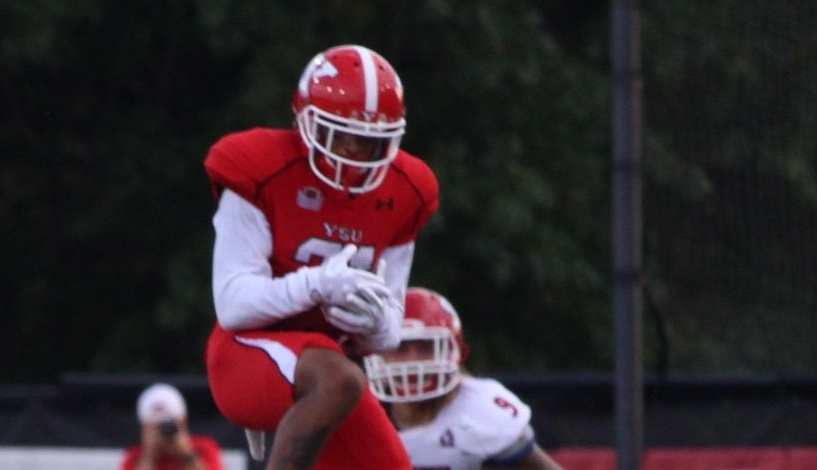 Darien Townsend Overcame Obstacles to be a Starter

During the Youngstown State University football team’s annual Red and White spring game, the Penguins put on a scrimmage for the public and left almost completely healthy. One player, however, suffered a major setback, wide receiver Darien Townsend.

Townsend isn’t your typical story of a college athlete. He wasn’t a prestigious recruit or starred as an up-and-coming football player.

He attended Youngstown Christian High School, a program that has seen its fair share of struggles. During his high school career, Townsend was a First-team All-Northeast Inland District Division VII honoree as a senior and accounted for 1,000 yards of offense each year.

Despite the stats, Townsend didn’t get many looks from Division I programs. He received several offers Mid-American Conference schools but chose to play for YSU.

He didn’t play much during his first two seasons with the Penguins. Townsend sat behind YSU’s top two receivers Andre Stubbs and Andrew Williams. He played in 20 games but most of his time was on special teams. During that span, he caught 11 passes for 135 yards.

“I think I just learned from those guys, Andrew and Andre, learning how to be a leader, how to play fast every day — just the things I needed to learn that I didn’t learn in high school,” Townsend said. “Now I’m a junior and I’m in a place that I need to be to help the younger guys.”

Stubbs and Williams graduated last year, and at the start of spring practice, Townsend was next in line for a starting spot. But he broke his collarbone during the Red and White game and had to sit out the rest of the spring.

After coming back from the broken collarbone, Townsend injured his knee during the beginning of the season. Luckily, he didn’t miss any game time.

“They’re extra careful with me and the things that I do,” Townsend said. “I have extra padding under my equipment so I’m not too concerned with getting injured. Whatever happens, happens.

It was frustrating, not thinking I was going to be put back on the bench, but it was a setback. I was feeling like I was getting to where I needed to be. With the setback I had, it was just all mental. I had to understand that I needed to get out here and prepare to get back to where I was.”

This season Townsend started all five games this season. He caught eight passes for 153 yards and two touchdowns. His first touchdown pass was a 49-yard touchdown reception from quarterback Ricky Davis during YSU’s season opener against Duquesne.

Townsend said he would describe himself as YSU’s “underdog.” He said he’s not the fastest receiver and he’s not the biggest, but he prides himself on being consistent in his route running and fundamentals.

“I’m definitely somebody that not a lot of people looked to as an outstanding star until they see me come out here and play,” Townsend said. “I’m always looked at as the little guy, the slower guy. But when I start making play then [they say] ‘oh he’s really good.’”

This season, Townsend isn’t just contributing as a receiver. He’s also a kick returner and the starting punt returner. He said the chip on his shoulder allowed him to improve every year since he joined YSU.

“It keeps me going. I don’t ever have the mindset to be content with what just happened or content with the game before,” Townsend said. “I just try to get better, because I know there are other people out there that are trying to get better too.”

One thought on “YSU’s Underdog:”