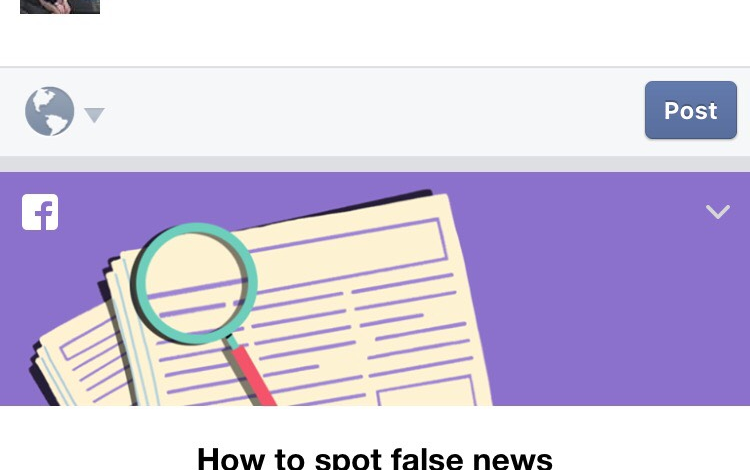 Fake news — this seems to be the new overused word floating around the web. In a world where posts can go viral online within a few hours, it’s easy for people to get lost in what is real news and what is fake.

Some examples she listed were the great moon hoax in 1835 and the stories we read in tabloids at the checkout counter.

“Society has been engaging with this content for a long time. The recent focus on politics, coupled with the tendency to use social media to distribute it, makes it seem like a new thing, but it’s not,” Earnheardt said. “We’ve survived it for a long time and I imagine, we’ll be alright.”

Facebook recently came out with a new tool that helps members spot “false news” in order to “work to limit the spread of it” the social media site states.

The site tells users to be skeptical of headlines, inspect the dates of the article, examine the URL and look for the story on another reliable news source.

The problem with this as Shelley Blundell, assistant professor of journalism and communications at YSU, explains is that the new tool by Facebook uses a button on posts that states it was disputed by Snopes.com and/or Politifact.

“So what is the dispute? So, throwing out the buzz words or organizations that may have a certain amount of respect in terms of being authoritative; how do I know that’s not fake?  Because it doesn’t explain to me what’s disputed or how, it just says that it’s been disputed,” Blundell said.

A study by Natalie Hoelzel, a YSU student, examined how fake news can quickly go viral and the subsequent dangers thereafter. It even showcased specific situations that proved just how serious the problem of fake news can be.

“I started out with the story of the D.C. Pizzeria, when rumors fled the internet about how Clinton was hosting a child sex ring in the basement of the shop and a man drove about seven hours with a gun to ‘self-investigate,’” Hoelzel explained.

As time progresses, the world’s trust in news sources is rapidly declining. From politicians declaring a war on the media for coverage that goes against them to the rise in fake stories produced by citizen journalists on the internet.

Keith Lepak, associate professor of political science at YSU, said that because of technology, people have become less critical readers.

“Many people don’t bother to think before they write, or weigh what they want to say against other major media sources,” Lepak said. “Americans generally have become poorer readers … precisely because of these developments.”

Regardless of innovative buttons that claim to have checked the article for falsities, it’s good to always be on the lookout for what is real and what is false news on the internet.

Adam Fuller, another associate professor for political science, said people need to take authenticating news into their own hands.

“Mainstream reporting could be challenged by competing news outlets or by the people relevant to the story who offer different versions of what their sources are telling them,” Fuller said. “The fabricated stories designed to be deceptive could be easily dismissed if no reputable news agency is reporting on the same story.”

For the time being, there seems to be no point of stopping for the fake news train. The best advice is to stay aware, know how to spot fabricated stories and know the difference between what is real in what is fake in this ever growing fast-paced world of modern digital journalism.