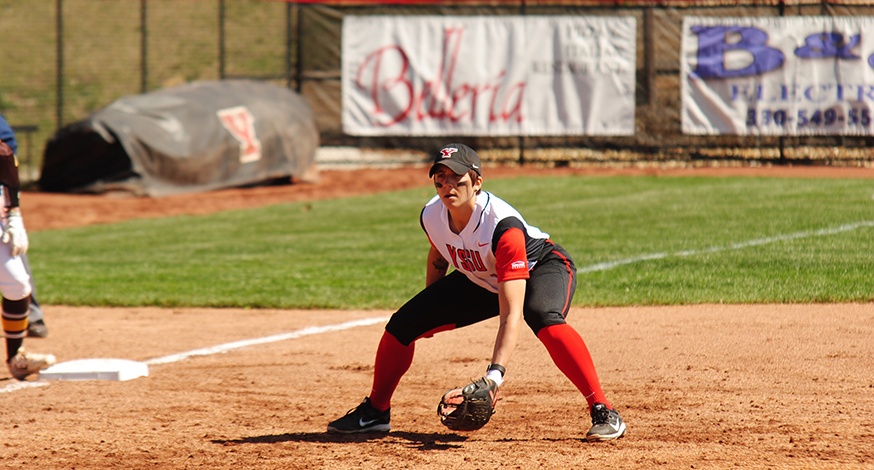 Following Friday night’s 9-2 win over Wright State University, the Youngstown State University softball team thought it could win the series against one of the top teams in the Horizon League and continue to move up the conference standings.

But the Penguins were unable to come up with timely hits against the Raiders in both games of Saturday’s doubleheader. YSU lost the first game 3-2 and the second game 2-1.

“We had a good day yesterday, and I definitely think we came in with a lot of confidence, but with that being said, I don’t think we capitalized when we had the opportunities,” YSU’s Stevie Taylor said. “That definitely killed us, unlike yesterday when we did our job when we needed to. We’ve had a long week, and I think we need to come out next week and do what we know how to do best, and that’s capitalize on opportunities and score runners.”

YSU was able to capitalize on a couple of Wright State miscues in the first game. In a scoreless game in the bottom of the fourth inning, YSU third baseman Miranda Castiglione hit a double to left-center field. But a throwing error allowed YSU’s Sarah Dowd to score. Castiglione advanced from second to third on the play.

After an infield single by YSU first baseman Alex Gibson, Taylor hit a sacrifice fly to leftfield, allowing Castiglione to tag from third base to increase the lead to 2-0.

Wright State responded in the top of the fifth inning. With a runner on first, Raiders’ right fielder Honnah Susor hit a two-out double to left-center field. The next batter, Vivi Marquez, followed it up with another double down the right field line. Wright State’s Jordan Kennaw and Susor scored on the hit.

Things didn’t improve for the Penguins in the second game of the doubleheader.

After Wright State took a 1-0 lead, YSU second baseman Brittney Moffatt tied the game with a solo homerun to right-center field in the fifth inning. But that was all the Penguins were able to muster up in the second game.

“She was just keeping it low, and none of us could do anything with what she was pitching,” Moffatt said. “It was just kinda hard for us to get anything going.”

Taylor said the Penguins should learn from their performance in the series and should know how close they were to sweeping the Raiders.

“It definitely should put a fire under all of us to finish high in the Horizon League and do our best because we shouldn’t lose to a team like that, especially with our talent,” Taylor said. “It should light a fire under us to do better next time, knowing we could have won those games.

“It’s a game of inches and sometimes you fall short of those inches. We had a lot of strong hits today, and they just went to people. Eventually those are going to fall, and that’s when we’re going to capitalize on those.”