Guinathon, a dance marathon organized by Youngstown State University students, announced on Saturday that it raised $18,247.62 to benefit the Akron Children’s Hospital of the Mahoning Valley.

Jenna Roesch, the executive director of Guinathon, said that the group initially set a goal around $15,000 but decided to up the desired amount after hearing stories of families that use different services at Akron Children’s. 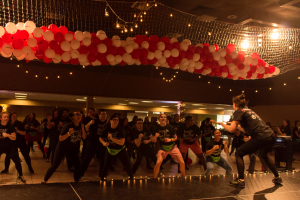 The event ran from 12-8 p.m. in the Chestnut Room in Kilcawley Center. There were also breakout rooms that had activities like Rock Band and a photo booth.

To collect donations, fundraisers, like a tournament or dog booth, were held throughout the year. In addition, each person who signed up to participate in Saturday’s dance-a-thon had their own personal fundraising accounts that were all online donations.

Katie Stanwood, the public relations manager for Guinathon, said that the event was made to highlight miracle families, those who had children that frequented Akron Children’s Hospital for care.

“Each hour, a different one of our miracle families tells their story about how the hospital has impacted them and helped them out,” Stanwood said. “At the beginning of every hour [the attendees] learn a part of our morale dance so at the end of the night we can all do the dance together.”

Kathy Trella is the mother of miracle child, Christian, and Guinathon board member, Kara. 11-year-old Christian was born six weeks early with a hole in his heart and needed NICU care until he was strong enough to be operated on.

“At five months of age, he was big enough that he could have a five-and-a-half hour surgery,” Trella said. “He’s fine now, but he will need one more additional surgery somewhere between his late teens and early 20’s. He still has a murmur.”

Seeing those at the event supporting the hospital and the families that use it was a touching moment, Trella said.

“It’s a way to let us know that we’re not alone, that there are other people who are going through or have gone through this too,” she said. “It’s a good time … It’s a tearjerker.”

Roesch and the rest of the students participating in the Guinathon said they did what they did for one thing: the kids. Although this dance marathon is over, planning for next year’s event is just beginning.

“Applications [for Guinathon] are going out to every single person on campus,” Roesch said. “Right after spring break we have a meeting on March 20th. Planning starts right from there.”