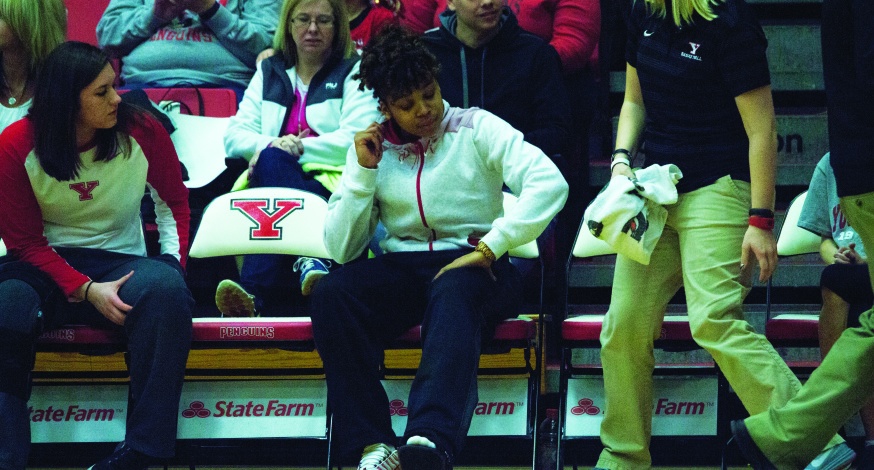 The Youngstown State University women’s basketball team has a week off before its next game against Cleveland State University on Saturday, and YSU head coach John Barnes says the timing couldn’t be better.

Starting point guard Indiya Benjamin suffered an injury during the first half of the Penguins’ 69-35 loss to the University of Wisconsin-Green Bay on Feb. 11. Forwards Morgan Olson and Janae Jackson didn’t dress in the Green Bay game.

YSU was shorthanded but won their game against the University of Milwaukee Wisconsin 70-62 on Saturday. Now the Penguins will come home to play their last three games at the Beeghly Center

“It couldn’t have happened at a better time. Indiya got hurt early against Green Bay and pretty much sat from the first quarter on,” Barnes said. “She didn’t play at all after that. With Janae being out, this gives us a chance to heal up those injuries. This gives those players a chance to get to full strength or as close to it as possible for this weekend.

“We need to get healthy … that’s the main point and I think being on the home floor, in front of the home crowd will only energize us coming off a big win on the road against Milwaukee will help our confidence too,” Barnes said.

Jackson suffered from an ankle injury against the University of Detroit Mercy on Feb. 6. Barnes isn’t sure when she will be able to return to the starting lineup.

“Janae’s still day-to-day. She is getting better. We’re hoping for the best and [for her to come back] as soon as possible,” Barnes said. “Obviously we don’t want to bring her out too early and reinjure it.”

Barnes said Benjamin is working with YSU athletic trainer Jeff Willis, and he is trying to get Benjamin back as soon as possible without putting her in position to reinjure herself down the line.

“When you roll an ankle it’s not as strong. Jeff’s doing a great job rehabbing, tapping and doing everything he can,” Barnes said. “It’s gonna be … I don’t want to say a problem but it’s going to be there the rest of the season. Whatever you do it’s gonna be there. Let’s hope she doesn’t land on someone’s foot or land the wrong way and tweak it again.”

With the number of injuries, YSU was forced to go to their bench more during the win over Milwaukee. The Penguins’ bench contributed 30 points; 15 points by guard Jenna Hirsch and 13 points by guard Alison Smolinski.

“It was huge. Jenna Hirsch played the game of the season for her. She’s very capable of doing that and we’ve kinda been waiting for that breakout game for her,” Barnes said. “I have no doubts that she’s gonna continue right where she left off, and she’ll play well from here on out.

“With Indiya being hurt, that was big. I thought Kelley Wright did a great job; she made three 3’s. Alison Smolinski was kinda back to her own self and made a bunch of shots. Every person on the team either scored or had an assist. We need that being depleted in terms of injury.

“The Milwaukee game was just huge,” Barnes said. “We talked about it after the Green Bay game — who everyone was extremely disappointed, how the game went and how badly we had been beaten and how easy it would be just to [think] ‘well we’re on the road, it’s another game, Indiya’s not healthy, Janae’s out’ … to sit back and let a loss happen and to sit back and try to get back home and regroup. It just showed the toughness of the team, how much they wanted to win and everybody sitting together and everyone doing their part to help us get the win.”