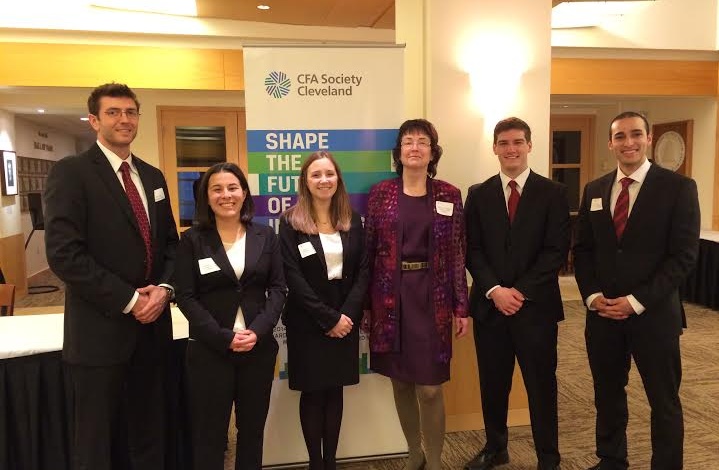 Six undergraduates in the Williamson College of Business Administration placed third at the Chartered Financial Analyst Research Challenge in Cleveland.

The team, comprised of Nicholas Conti, Samantha Anderson, Kayla Cerimele, Conner Kesner and Simon Rafidi, competed at the regional level against other teams from Ohio.

Students make, buy, sell or hold recommendations on publicly traded companies. For this competition, they submitted a report on Signet Jewelers.

“This is something that an investor would buy from a research company to make a recommendation to their clients,” Conti said.

This is the first time Youngstown State University has participated in the competition. They competed against nine other schools with several years’ experience and a combination of graduate and undergraduate students.

“Most of the people in the competition were masters level students that have competed in something like this before,” Kesner said. “We had to essentially develop our own template, our own framework, being undergraduate students.”

He said about half the report — including the analysis and evaluation — is stuff undergraduates only see in their highest level finance courses, if at all.

Conti and Kesner partnered up to prepare for the competition and recruited Anderson, Cerimele and Rafidi because of what they could bring to the team.

The team performed financial analysis on the company, looking at not just the company itself, but the industry as a whole. They prepared an in-depth research report and oral presentation.

The students visited Signet’s Akron headquarters in October to speak to the company’s investor relations representative.

Conti said the project took over 150 hours to finish and get ready for competition.

“Sometimes you could see us at Williamson working until 3 a.m. just to get everything together,” Conti said. “We submitted the project the day it was due, and it was an arduous process.”

He said it was a learning experience, and he was impressed with the performance given their relative inexperience.

“We really did well in the oral presentation,” Conti said. “The judges said that all the top three teams were really close.”

Following the presentation, there is a question and answer session with the judges.

“We were able to answer questions about future growth, where we see some advantages over the competitors, etc.,” Kesner said. “We seemed to have better comprehensive knowledge than the other groups … based on our scores and how we felt about it afterwards.”

Rafidi said they were motivated by wanting to represent YSU in a positive way.

“A competition like this is very new to our college and our university,” Rafidi said. “We wanted to get out there and show what our college could offer to other students, especially when they are considering other schools that are more expensive or are more easily recognized.”

Kesner said he hopes they helped pave the way for future groups that compete in the research challenge.

“That is what we were most excited about,” Kesner said. “How much we were able to talk about this experience in interviews, and how we can get other people in our major and our field ready for something like this.”

Conti said they would be available to assist or coach a future group, helping to guide them through the process.