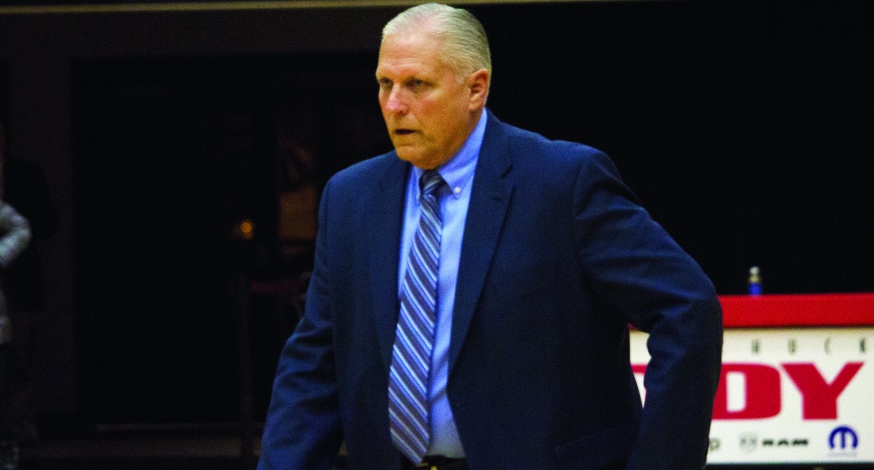 The Youngstown State University men’s basketball team has found itself on another three-game losing streak and looking for answers before the end of YSU’s four-game home stand.

YSU will host Cleveland State University on Thursday. The Penguins beat the Vikings 70-55 in the first meeting at Quicken Loans Arena on Jan. 24. YSU played strong defense holding Cleveland State to 35.3 percent from the field and 27.8 percent from behind the 3-point line.

“Obviously Cleveland State’s gonna come in with energy. They’re a great defensive basketball team, and they really get up and pressure you hard,” YSU head coach Jerry Slocum said. “I’m sure they don’t want to lose to us twice in a year. I’m sure it will be a hard-fought, emotional game. That’ll be a game that I’m sure they’ll be ready for.”

After losing 94-92 to the University of Detroit Mercy, Slocum said the team is trying to find a way to get back on track heading into the final two games of the current home stand.

“Work hard and keep on preaching the things that we’ve preached everyday in terms of intensity,” Slocum said. “I would love to say to you that there’s a formula for that … there’s no formula no matter what level your at — whether it’s our game, a Super Bowl game or high school game. You can’t guarantee those kinds of issues. All you can do is practice hard and prepare your guys. That’s what we’ll do.”

The Penguins have struggled on defense all season. YSU is ninth in the Horizon League, allowing 83 points per game. Freshman forward Devin Haygood has been inserted into the starting lineup. Haygood is replacing injured center Sidney Umude, and Slocum said Haygood will provide more consistency on defense from the power forward position.

YSU guard Brett Frantz said the team is going to change its defense heading into this week’s games.

“If we’re gonna be playing more man-to-man defense, than we’re gonna need to know our defensive positioning off the ball,” Frantz said. “Everyone hugs their man and in man-to-man defense you need to be on the help side. When the ball goes into the post … we’re working on trapping — we need to know our slides off the trap and be able to be in the right spots, and we could help each other and play as a team on defense.”

Frantz said the Penguins might not change their game plan heading into Thursday’s game. He said YSU was able to win the first game at Quicken Loans Arena, so they might stick to the same strategy.

“When we played Cleveland State down at ‘the Q’ we played a really good game,” Frantz said. “So I think we need to use the same game plan that we used the last time we played them, and we’ll be all right.”