Youngstown State University’s Department of Theatre & Dance announced the performances of their upcoming season, which includes plays, musicals, concerts and other events.

“There are skeletons lying all over the department waiting to make their stage debut,” she said.

Dubos said everyone should come see the show in October.

“Who doesn’t love ‘The Addams Family’?” she said. “Each character in this huge cast is developing their own quirky character, and I think it will be fun to see all these crazy characters running around on stage together.”

“We love stories,” she said. “Sometimes we’re able to relate to those stories. Some of them are timeless. This was written in the 1990s, but it could’ve been written yesterday.”

“How I Learned to Drive” deals with difficult subject involving sexuality and abuse. Though Foltz doesn’t feel the story involves sexual assault, she said people may connect to the story.

“Theatre should disturb the peace,” she said.

Mia Colon, senior musical theatre major, is the stage manager for “How I Learned to Drive.”  She said being a part of a controversial production is exhilarating.

“Though this play deals with various tough issues, it is not defined by them,” Colon said. “There are so many more underlying meanings such as power, the role of women, who is truly in control.”

She said seeing “How I Learned to Drive” is an opportunity no one should pass up.

“I think this is definitely a show the audience shouldn’t write off,” she said.

Season subscriptions are available for $60 dollars and can be purchased by calling the university theater box office at 330-941-3105 or by emailing Lori Factor at lafactor@ysu.edu. University theater performances are free for YSU students.

Performances and events are scheduled as follows: 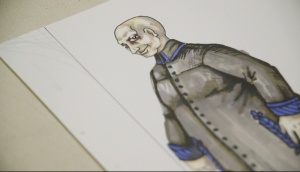 “How I Learned to Drive”

An affair between a young protagonist and her uncle. “How I Learned to Drive” is a memory play full of vignettes involving victimization, sexual abuse and alcoholism. However, it is also about growth, acceptance and forgiveness.

This is the 7th annual evening of Ten-Minute Plays featuring student directors and actors. Admission is free.

“The Brothers Grimm hit the stage with an epic fairytale about wishes, family and the choices we make … a rare modern classic … Come experience the charm and magic of this multiple Tony and Drama Desk Award winning musical!”

“Join us for the second annual Festival of New Works that highlights and honors student creativity in playwriting, choreography, designing, filmmaking, directing and acting … A student(s) will be selected to win the Molly & Sam Galano Creativity Award. All donations will support the award endowment.”