About 25 children come to the practices every Friday of the 10-week program. Bob Hannon, president of United Way of Youngstown and the Mahoning Valley, said this is part of the Success After 6 initiative to expose children in Youngstown to new opportunities.

“We bring the kids here to not only teach them tennis, but etiquette [and] how to work together,” Hannon said. “You know it’s going well when you’re in your third week and all the kids are coming back.”

According to a United Way press release, Success After 6 adopted tennis as a major activity last summer after receiving a grant from the United States Tennis Association and partnering with the Jewish Community Center.

Volunteer Amy Hendricks is involved with Israel Tennis Centers, a nonprofit agency that brings children together on the court regardless of race, religion or ethnic background. She said this was something they wanted to try with Youngstown students.

“It was so successful and they love it,” Hendricks said.

She said last year the program included students from four inner-city schools and the Youngstown Community School. In addition to athletic activities like tennis, basketball and swimming, the students learned about Israeli culture and famous tennis players.

Moving forward, Hendricks wanted to get YSU involved with the initiative. 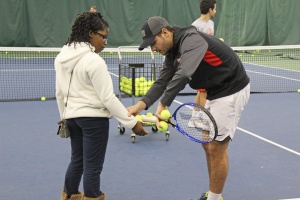 “We thought it was a good idea to bring YSU in because [the team] is so multicultural,” Hendricks said. “For the kids to see college students who are successful athletes and successful students of every shape and size and color, it’s a really good example. They can say, ‘Hey, I can go to college and I can be an athlete too.’”

Yossi Dahan, YSU tennis player from Israel, said he grew up with Israel Tennis Centers and even coached children at them before coming to the U.S. in 2015. He said the program feels close to home for him.

“All of the centers were located in underprivileged areas … we had programs for people to come play tennis who can’t afford it,” he said.

Hannon said their goal is to do the same thing for Youngstown Community School children.

“You look at tennis and golf, it’s mostly Caucasian [players],” he said. “Our goal is that maybe two to four [students] really like this and they continue. Maybe they’ll play tennis in high school. Maybe they’ll get a scholarship.”

Dahan said if he was able to inspire at least one of the students, it will have been a success for him.

“Some people don’t have the opportunities to play tennis. Not everyone can afford it, so I think that it’s great and I’m proud to be a part of it,” Dahan said.

The YSU Men’s Tennis team led the activities on Friday, teaching the students rules of the court and playing games with them. Head coach Mickaël Sopel said it has been a great experience and he hopes the team can continue volunteering with this initiative in the future.

“When you give, it’s always a good feeling,” Sopel said. “It’s nice to have them involved in the community.”

Support from the Thomases Family Endowment of the Youngstown Area Jewish Foundation and United Way will allow the program to continue into the summer, according to the press release.