Youngstown State University recently completed a survey of low-enrolled classes which found that around five percent of classes offered each semester are under enrolled.

As part of the Ohio Task Force on Affordability and Efficiency, the state required public universities to report all low-enrolled classes along with a justification for the low-enrollment or a plan of action to correct it.

Jeff Robinson, director of communications for the Ohio Department of Higher Education, said the state is just collecting data at this point.

“It will let us see if there is any way that a class could be maybe combined with another campus in the region that’s doing a similar class or … is there a way to be more efficient with it or find a way to combine it with another [class],” Robinson said.

YSU Provost Martin Abraham said both the state and the university are concerned with the cost of a college education.

“The more we can do to keep those costs low, the easier it is for us to pass on those savings to our students, and the state’s trying to encourage everybody to do that,” Abraham said.

YSU defined a low-enrolled undergraduate class as one with 15 or fewer students. They reached this definition by looking at what the labor agreement between YSU and the Ohio Education Association regards as a fully-enrolled class. For graduate students, the definition was 9 or fewer students.

They had to report all classes that fell below 120 percent of that definition. For YSU, that meant undergraduate classes with 17 or fewer students. 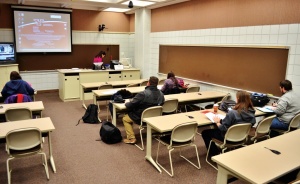 Abraham said about half of the classes YSU offers fall below that mark, but there are often reasons for that. Laboratory classes often have 12 to 15 students. Capstone classes are generally smaller.

Abraham said there is a greater concern for classes that didn’t have a reason for being low enrolled.

“We offer about 1500 classes each semester,” Abraham said. “Less than 100 courses that we recognized as being small, low-enrolled, and we couldn’t come up for a good reason why they should be like that.”

Abraham said there some opportunities to increase efficiency in this realm, but he stressed that they are not making any decisions yet.

One possible avenue is to reduce sections.

“If I’ve got 50 students or 75 students enrolled in five sections, I can get away with fewer sections, and I can do it without any loss of effectiveness,” Abraham said. “There’s no harm to the students because we’re eliminating sections; we’re not eliminating courses.”

Another is to offer classes with less frequency.

Abraham said the state really wanted them to investigate collaborating with local universities as well.

“We found very few examples where that really seemed to be particularly effective as a strategy for us going forward,” Abraham said.

He said another group of classes they excluded from consideration were those required for certain degree programs.

“There’s not a lot we can do about that as long as we’re offering that program,” Abraham said. “Of course that begs the question, do we need to stop offering those programs?”

He said part of the program review process involves looking at those and assessing the impact of discontinuing programs, but they still have a lot of analysis to do before they reach that point.

The state requested that universities submit reports by the end of the month.