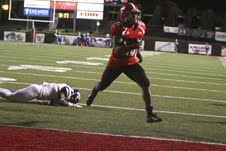 The Youngstown State University football team suffered a frustrating 30-24 loss on Saturday night as Western Illinois Leathernecks handed the Penguins their first Horizon League loss. The Penguins fall to 4-2 on the season and 1-1 during conference play.

The Penguins struggled to control their emotions throughout the game.

Defensive end Desmond Williams was ejected on the first play for targeting the head of a WIU player. Another Penguin defensive end, Terrell Williams, was also ejected in the beginning of the fourth quarter for a flagrant personal foul after an altercation with a Leatherneck offensive lineman.

Starting quarterback Dante Nania left the game during the first quarter. Head Coach Eric Wolford said the change at quarterback was discussed by the coaches leading up to the game.

Backup Hunter Wells took over with 14:55 left in the second quarter. Wells provided a spark to the YSU offense. He completed 7-10 for 76 yards during the first quarter, but the offensive production slowed down during the second half. Wells finished completing 14-25 for 187 yards and one touchdown.

Running backs Martin Ruiz and Jody Webb tried to effectively run the ball but couldn’t maintain much success. Ruiz led the team in rushing with 14 carries for 81 yards and Webb finished second with eight carries for 57 yards.

The defense had trouble stopping the Leathernecks as they completed an 11 play 80 yard drive on WIU’s first possession. The defense turned things around after the Penguins stopped the Leathernecks on fourth down and inches from the YSU 29 yard line with 12:58 left in the second quarter.

YSU later forced a three and out to begin the second half, but a WIU fake punt resulted in a 27 yard run and a first down. The Penguin defense couldn’t stop the Leathernecks the rest of the quarter allowing WIU quarterback Trenton Norvell to complete a 35 yard touchdown pass to wide receiver Joey Borsellino. The touchdown to Borsellino extended the Leatherneck lead and put the game nearly out of reach by the third quarter.

In the end, YSU allowed 455 yards of total offense to the Leathernecks. Senior safety Donald D’Alesio believes that the defense is correctable and the team needs to stay focused heading into the second half of the season.

“We just had breakdowns in the secondary and miscommunications. That’s about it really. Give them credit though they were a good offense, but we hurt ourselves, especially with personal foul penalties and we just kept giving them yards,” he said.

Senior wide receiver Jelani Berassa didn’t want to comment on the quarterback change or the offensive troubles, but Berassa did to assure the media that this was not the end to the Penguins season.

“Everything is still in front of us. We got one loss in the conference, and it’s still early in the season,” he said. “It’s not like its over for Youngstown State football. We’re still going to come out and try to correct our mistakes.”

Wolford hopes his team will forget about the loss, and focus on their upcoming game against Southern Illinois. The Salukis suffered their first conference loss to North Dakota State Bison on Saturday.

“They came in here and found a way to get a win. In 24 hours we’ll get ourselves together here,” Wolford said. “Get ready to go out again next week against Southern Illinois, who came off a tough loss against North Dakota State. So we’ll need to regroup ourselves and get ready to play for next week. Everything today was correctable and some was self-inflicted.”