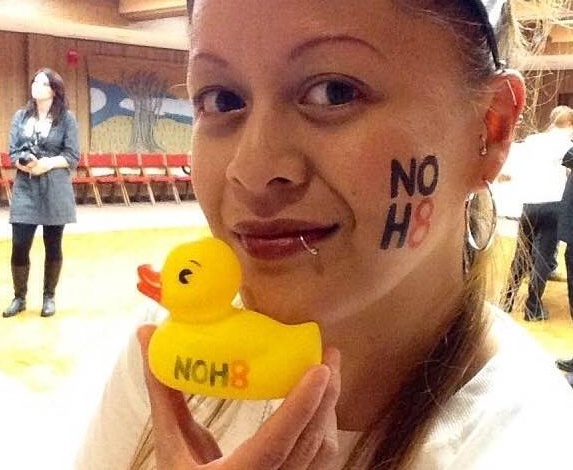 I never knew what it was like. I never got what my friends were talking about when they talked about boys. I never understood what they meant about how “they felt fireworks,” or “I got butterflies in my stomach,” all of those cliché statements — I just never felt any of it. I tried, believe me. But any boy that I ever kissed and dated, it just never came. After a while, I thought something was wrong with me. I thought maybe I could be asexual. Maybe I was incapable of love. I was disinterested in having a physical relationship.

I was 18 when I graduated high school — mind you, I went to a Catholic school; this is important to know. I celebrated this milestone with my family and friends — my very best friend, in particular. We became closer in my final two years of high school. She became an essential part of my life.

One day, on an ordinary summer day, she and I were cleaning and organizing my room and just hanging out. I recall being surrounded by boxes or mementos, clothes and photos. We fell into a companionable silence for a while, but then I sensed that she had something to say. I remember seeing her open her mouth, then close it just as quickly. She did this a few times before she finally spoke. I always talk about this moment as “the seven words that changed my world forever.”

“I think I’m in love with you.” I didn’t think I heard her correctly. My heart was racing, in a way I never felt in my entire life — I honestly thought that it was going to beat right out of my chest. I was scared. I was excited. I was really scared. I responded with something mundane like, “I’m hungry. What do you want for dinner? Pizza? Chinese? I could really have pizza right now.” We didn’t deal with those words for many hours, until the evening. It was the second moment that changed my life forever.

One kiss. All it took was one kiss from her. My best friend, the one who opened my eyes, and in one moment I felt everything that my friends had always talked about — the fireworks, the butterflies. I knew, indeed, I was in love the entire time, but had no idea because I never considered that I might be gay.

While my newfound love changed my life for the better, it also showed me the negative aspects of loving someone in a way that wasn’t “normal.” For the longest time, we kept our relationship a secret. We didn’t tell our closest friends for a few months, fearing we would be judged and left behind. At the time, we were lucky to have such wonderful and supportive friends.

My family was a different story, as was my church. I was inadvertently outed by a family member, who had gone through my things to prove their suspicion of my identity and relationship. My parents were furious. I was kicked out of my house and had to take shelter in my girlfriend’s and close friend’s houses for a few weeks. After that, it felt like everyone knew. I felt naked and exposed. I couldn’t trust anyone.

It was a dark time for me. Whenever I would go to church, I felt that those who knew about me were throwing disdainful glances, wondering what I was doing there. I felt shunned. The entire world, as I knew it, was no longer a world I felt comfortable in.

In the three-year relationship that I had with my best friend, we were very much in love, but very fearful of the world around us. We felt as if the only safe shelter we had was with each other. Eventually, my parents quietly accepted my lifestyle, but that acceptance wouldn’t come for another a few years, after I had moved out of their home.

As a result of my “Coming Out Story” — which really isn’t a coming out story since I was outed — I have learned to make a home for myself within myself and with whomever I feel safest with, whether that is with my partner or my chosen family and friends. It has taken me a long time of self-discovery and advocacy to be who I am today. Being the president of YSUnity from 2011 to 2014 and having the ability to reach out and help others who are going through what I had gone through is my way of paying forward all of the wonderful hearts along the way, who have always accepted mine, unconditionally. These people are my heroes. I can only hope to be one to someone else one day.

I started to realize I was gay around the age of 15 or 16 years old. With the school system that I was in and the church I was a part of — Independent Fundamental Baptist — there was no way that I was coming out. I was battling myself for years about whether or not to come out. The more I battled with myself, the more depressed and miserable I became. It got to the point where I was just a big ball of hate, anger and every miserable emotion possible, just walking around being mad at everything and everyone.

It wasn’t until I got to college when I started to feel the least bit happy. There were different people that were a lot more accepting of people from different backgrounds, race and ethnicity. I felt more myself, but still was battling with the idea of coming out. From high school until I decided to come out, I was struggling with the thought of suicide, thinking I would be better off. I felt this way until I decided to take a course called Careers in Psychology. The teacher I had was a good professor, but it seemed as if she was harder on me than the other students and I didn’t know why. At first I thought maybe she didn’t like me, but then I figured it out. She knew something was wrong and bothering me. And there was — I still had yet to accept myself for who I was and was meant to be. Everything just started to stress me out to the point of exhaustion.

When I went home for Christmas vacation that year, I thought about saying something to at least my mom, but chickened out. Well I got my cartilage pierced with my cousin, who is a big supporter of me and who I am meant to be. I then came back and was told by my pastor at the IFB church that I could no longer play in the church orchestra, because I had a piercing in the cartilage. I then stopped going and continued my life in college, working for the campus food service, as I was still struggling with my sexuality.

Spring break came around, and I was excited because I was going home without going home. I was staying with my manager, her husband and her daughter. Needless to say, she already knew that I was gay. I was just so tired and exhausted trying to be straight or thought I was being straight when I really wasn’t. So I came out to her, and a couple friends first. Their reaction was “Corey, we already knew you were gay before you did. We were just waiting on you.”

I was happy that they accepted and loved me unconditionally. I then called my mom and swore her to secrecy, or I would never talk to her again. When she agreed, I told her I was at Krystal’s house in Huron and asked her to come to me on her way to work. When she got there, I started to tear up and she was asking me what was wrong. Through my tears I told my mom I was gay and I hope she still loves and accepts me for me. She started to hold me tight and tearing up as well and said “I will always love and accept you unconditionally, for you are my son. I’m happy as long as you’re happy. I will support you and help you out whenever you need it.” I was so afraid of her reaction and of being rejected by the one person I loved the most, and that is why I waited so long to tell her.

After we hugged it out and cried together, we talked a little bit and she then left for work. After she left I called my mimi — dad’s mom — my aunt, my cousins that I was close to, my brother and sister-in-law, my sister and lastly my dad. Everyone was very accepting and supportive minus my dad and my sister — at first and still kind of today. I barely have a relationship with my dad. I got an email from my pastor asking where I have been and the reason why I stopped coming to church. I then proceeded to tell him that I was gay. After the long back and forth emails leading up to me telling him I was gay, he stopped emailing me and had everybody in the church unfriend me on Facebook because I was gay.

I would just like to add that people need to be more sensitive to people around this subject because it is very emotional and hard to accept oneself as part of the gay community.