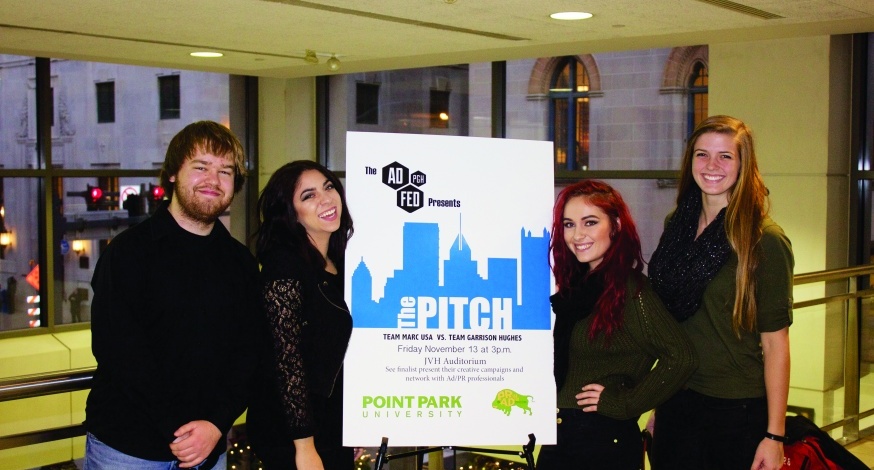 Future advertisements for Girl’s Hope — a non-profit organization helping teenage girls by providing them with nurturing homes — may feature the work of Youngstown State University students.

Eight students were broken into six groups with students from other universities to create advertisements for Girl’s Hope earlier this semester. Nathan Unger, Deanna Cameneti, Bogdan and Sturtz made it to the semifinals.

The students worked for advertising firms in Pittsburgh — Unger and Cameneti worked with Garrison Hughes while Sturtz and Bogdan worked with Marc USA.

“I’m still in utter shock. I mean, I know we had a great proposal, but we also had really good competition from team Garrison Hughes,” Sturtz said. “Overall, I’m really glad and excited it all came through at the end. We put a lot of effort and hard work to get to first place.”

She said she hopes Girl’s Hope will use bits and pieces of it, if they decide not to use their whole project.

“I’m not really sure what the client’s plan is with the campaign we came up with. Our goal was to raise $1 million with a $500 budget,” Sturtz said. “It’s a really great organization that deserves the funding and recognition within the community.”

Bogdan said her team winning should bring some recognition to YSU.

She also said she believes in Girl’s Hope’s mission.

“We did not really get to know the client, but I really like what they stand for and what their mission is,” Bogdan said. “I am really proud to have gotten the opportunity to have worked with them and what they represent.”

Inside Thayer Hall on Point Park University’s campus, the two semi-finalist groups stood on stage to present their projects to around 30 people, including Girl’s Hope representatives.

After the presentations, Rebecca Senneway, director of the Education Committee for the Pitt AdFed, said that one of the main reasons that YSU students have been successful in the Pitt AdFed contests is because of Rich Helfrich, a YSU assistant professor in graphic and interactive design.

“When you have [a] professor, like Rich, that’s willing to support the program, we get the best students,” Senneway said. “He’s looking out for his students, he made first contact with me to get involved, and clearly goes out of his way for his kids. I think he’s a gem.”

Senneway said one of the greatest advantages of the Pitt AdFed Contest is to have students work with the agency’s professionals and other mentors from the AdFed Board of Directors.

“These nine or ten students are in a room with an agency all day and these agency folks know their names,” Senneway said. “They have made such a strong network connection, and several students, over the past five years, are employed locally, have stayed in the area, after they’ve graduated.”

Senneway said that the Pittsburgh AdFed Contest winners will get resume reviews by some of the advertising professionals involved.

“And I send all of their final resumes out to our entire board, which really spans the agencies, the production companies, the media outlets, of this community’s professionals,” Senneway said.

“So, if one of the students I worked with —they were so smart, and strong and such strategic thinkers — that if any of them came to me wanting to introduced to a professional, I’d have no problem doing so.”