Youngstown State University students produced “Painted: A Horror Short Film,” which is about a young painter who buys a canvas that brings out her self-doubt and suicidal thoughts.

Miles Garrett, junior theater major, is the writer and director of the short film. Garrett said he created “Painted” to externalize the insecurities an artist might have.

He said the only way he felt he could show the true emotion behind the uncertainties is by making the short film a horror piece.

“You are literally being haunted by those insecurities and your inner demons,” Garrett said.

Although Garrett said he has experience directing a few web series episodes, “Painted” is the first short film he has released.

Garrett said his target audience is anyone in the creative field and he wants viewers to reflect on the idea that what they do carries baggage.

“Ultimately it is about entertainment, but hopefully they take it for a little bit more than just a horror piece about a haunted painting,” he said.

Tekac said Garrett proposed the idea to her a few months ago and together they created the storyline.

“[Garrett] was definitely the mastermind of the film,” she said. “He always has such great ideas and he’s wonderful to work with. I was honored he asked me to be a part of it.”

“Painted” has no dialogue and Tekac said it was intimidating to tell a story just through physical movement and facial expressions. She said Garrett helped her through each scene to make sure it was what he wanted.

Tekac said she enjoyed playing the painter because many people have struggled with self-doubt and it made the character easier to empathize with.

“Thankfully, I’ve never been in as dire of a situation as my character, but the frustration and devastation she feels is sadly quite relatable,” she said. 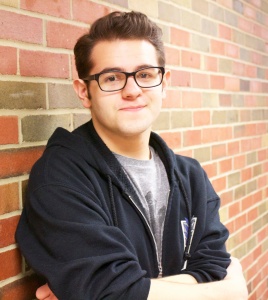 Marcella Sinclair, senior fine art major at Westminster College, is the artist behind all of the artwork in “Painted.”

Sinclair, who is Tekac’s brother’s fiancée, got involved in this project when Tekac asked her to help with the short film.

She said her artwork has never been in a short film before.

“It’s really cool, especially since I know it was posted on YouTube, which will allow for a lot of people to see my artwork,” she said.

Sinclair said she does a lot of portrait work, and she tries to go above and beyond to make people feel like they know the person in her portraits just by seeing the painting.

In “Painted” Sinclair said she tried to give the audience an uneasy feeling about the woman in the portrait by exaggerating her features and using no color except for her blood red lips.

“This woman in the portrait was a ghastly woman. [The audience] thinks whoever painted her didn’t do so to capture her beauty, they did it because it was an image burned into their brain that they needed to get out of it in a fit of insanity,” she said.

Sinclair said although she cannot relate to being driven insane by a possessed painting, there is truth behind getting to that point.

“Being an artist isn’t simply sitting down and throwing something at a canvas,” she said. “It is a lot of time and work, and if done right it can be emotionally draining because you put so much of yourself into everything you do as an artist.”

“Painted: A Horror Short Film” is on YouTube.com.