Thirty percent of college students change their major at least once within three years of enrollment, according to a 2017 study by the National Center for Education Statistics.

Justin Edwards, director of the Office of Career and Academic Advising, said students changing their major is a common occurrence at Youngstown State University.

Jarrod Kaminski, a senior telecommunications and sports broadcasting major, has changed his major three times since he started college.

Kaminski started out as a computer science major and hoped to find a job in information technology after graduation. However, he had friends working in IT who told him finding internships was difficult.

“That was a big concern,” he said.

Kaminski said he wasn’t willing to move from the Youngstown area to find a job in IT, so he moved on to business management.

“I switched to business because I thought that was the norm,” he said. “I figured I could find a job easily.”

Kaminski changed to a telecommunications and sports broadcasting major when he realized he could turn his passion for sports into a career.

He said it is rare for high school students to have a career path planned for their future.

“When you’re coming out of high school, you don’t really always exactly know what you want to do,” he said.

According to Edwards, changing majors can be viewed negatively by some, but he believes that it’s a positive part of the college experience because students have the opportunity to find a learning path that better suits them.

Coming into college, Van Scoy was interested in nursing.

“I thought nursing was going to be it for me,” she said.

She switched to a marketing major next after realizing that her nursing classes weren’t a good fit and she didn’t enjoy some of the curriculum, such as chemistry.

Van Scoy chose marketing because she comes from a family with a background in business, and she thought it was a basic major to get her started in the job field.

She then landed on a financial management major.

“I like working with money,” she said. “I figured I’d get a good education in learning how money works in business.”

Still, Van Scoy said she wishes she had done some things differently throughout her college career.

“If I could go back, I definitely would have chosen human resources,” she said.

Van Scoy said she wishes she would have met with her adviser more in her freshman year and that she had been asked how she felt about her classes at the time.

She said she believes students would feel more comfortable switching majors earlier if they had help evaluating their options.

Edwards said he encourages students to visit an exploratory adviser to learn how their strengths will fit into academic majors.

“Investing in your personal development starts with learning about who you are and then matching that with opportunities that are energizing for you,” he said.

The Office of Career and Academic Advising offers a variety of resources, including mock interviews, career counseling and exploratory advising for majors. The office is located on the second floor of Jones Hall and is open from 9 a.m. to 4 p.m., Monday through Thursday. 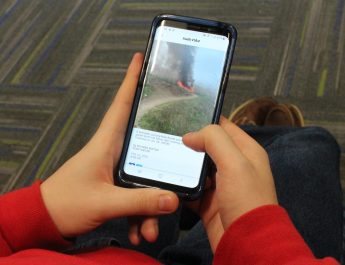 Race to First: How Misinformation Spreads