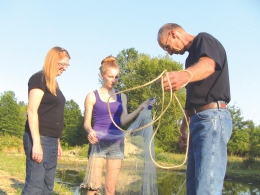 Dianne Pitcairn (left) looks for shrimp in her cast net along with daughter Katherine (middle) and husband Jim (right). The Pitcairns have been in the shrimp business, called Pitcairn Prawns, since June. Photo by Joe Catullo Jr./The Jambar.

Jim Pitcairn plowed through three days of muck and mud in his backyard in May, while raindrops trickled off a rented track hoe.

He pumped fresh water through 550 feet of piping underneath the grass and dirt, and released juvenile prawn shrimp into the three ponds on June 2.

And, with that, the Pitcairn family inaugurated its shrimp farm, Pitcairn Prawns, which began as a class project.

In the spring semester of 2011, Dianne Pitcairn walked into Diane Gonda’s English 1551 class as a nontraditional student. Gonda said Dianne Pitcairn was nervous because she had no computer skills, a key component of the class.

With a determined and enthusiastic mindset, Dianne Pitcairn focused on aquaculture and food production. By the semester’s end, she got more than an A — she received a project.

“I’m standing here right now getting chills down my spine, because isn’t that the purpose of a teacher: to give students the skills they need and actually put those skills to use for a better society, for their own personal gain?” Gonda said. “Isn’t that our job? And it happened in English 1551. In the past, there was no recognition of what these students were doing.”

Dianne Pitcairn was a nursing student at Youngstown State University approximately 30 years ago, before marrying her husband. She became a stay-at-home mother and, most recently, a part-time bookkeeper at AA Samuels Sheet Metal Co., Inc. for five years. She has three years remaining in her nursing program.

“She’s definitely a determined person,” said her youngest daughter, Katherine Pitcairn. “When she gets her mind set on something, she does it, and she convinces everyone around her to support her. We couldn’t have done it without all of her knowledge.”

“I told her she was crazy, but it seems to be working out for them so far,” Lisa Pitcairn said.

Dianne Pitcairn, born and raised in Canfield, said she loved seafood growing up and would fish on family vacations.

“I traveled extensively with my family on the Eastern Seaboard,” she said. “In Maine, we dug clams. I remember catching flounder off the coast of Virginia and catching blue crab there, and in Florida gathering oyster. I just have a love for seafood and sea life.”

Dianne Pitcairn was careful with from where the shrimp came and what type of shrimp she would get. She bought 5,500 shrimp for 8 cents each from Bob Calala, president of the Ohio Aquaculture Association, at Calala’s Water Haven Inc. in London, Ohio.

The species of the shrimp is called macrobrachium rosenbergii, also known as freshwater Malaysian prawns. These shrimp originated from Hawaii and then moved into other states.

Because of cooler temperatures in Ohio as opposed to the South, the shrimp do not mature sexually. Instead, they convert the energy into mass, making the shrimp larger over the short period of time they can live in Ohio.

Calala also visited the Pitcairn home on Aug. 17, helping the Pitcairns with the progress of their shrimp. Each shrimp began as 1 centimeter long; as of Saturday, they’re each an average of 4 inches long.

Attempting to keep the shrimp and ponds free from pesticides and antibiotics, Dianne Pitcairn chose Enviroflight LLC as her food supply.

Pitcairn Prawns is one of seven shrimp farms in the country to use the new product.

Dianne Pitcairn feeds her shrimp with a pelletized product made from corn distillers; it is fishmeal free. It is also made from black fly larva, which change the product into an amino acid profile that the shrimp can digest.

“We feed the shrimp every evening, and it’s based on how much the shrimp weigh,” Dianne Pitcairn said. “About 10 percent of their body weight is what they need to eat every day. We broadcast the feed over the entire surface of the pond.”

While the shrimp enjoy time swimming in the ponds, the Pitcairns will harvest them on Sept. 21 and sell them at a stand outside their home.

“That means the work is ending,” Jim Pitcairn said with a laugh. “We’ll pump all the water out and harvest the shrimp, and then they’ll just set until next spring.”

While their first season as shrimp farmers comes to a close, the Pitcairns have learned more than just tossing food into a pond.

“It is my social responsibility to raise them in an environmentally responsible way,” Dianne Pitcairn said. “This is the world we live in. We need to keep it clean.”