Youngstown State University student Georgia Kasamias attended the Student Entrepreneurship in Latin America, or SLA, Summit at McGill University in Montreal on March 17, with her team placing second in the competition.

According to their website, the SLA Summit serves as an incubator for student-led development projects. The first-place winner received $5,000 to implement their proposal. The conference and case competition focuses on social, political and economic problems in Latin American countries. 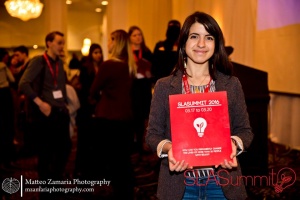 One hundred and fifty students from top universities from around the world comprised 20 teams that competed in the case competition. The teams worked alongside mentors from three NGOs: Techo-Haiti, GRUPEDSAC and Mosqoy-Q’ente.

Kasamias’ team had students of African, South American and European origin. They worked with the GRUPEDSAC, which operates in Mexico.

“Chepeginio, Mexico … has an agricultural sector that is suffering,” Kasamias said. “There are a lot of health problems because people are turning to unhealthy food.”

They worked on increasing their access to water through the use of fog catcher technology.

“From the water you can bolster your economy agriculturally and your health,” Kasamias said. “You do not need water from rain to receive water from fog catchers.”

Kasamias got involved with this project through a connection she made while studying abroad in Chile. She met Vincent Simboli there, who attends McGill and serves as co-chair of the summit.

“He invited me and my friend that lives in New Orleans,” Kasamias said. “It’s a good conference for YSU students to have on their radar.”

The summit has an interdisciplinary focus with 38 different academic programs represented in the competition.

“Interdisciplinary teams look at the region, and you can use each discipline’s strengths,” Kasamias said. “Finance can figure out how to pay for it, engineers can figure out what to build, etc.”

She said she hopes more YSU students will enter the competition in the future.

“It was a good experience,” Kasamias said. “I learned a lot, and it was definitely more international than anything I have done before.”