Isebella Greathouse, a geography major at Youngstown State University, has overcame many obstacles in her life from homelessness to becoming pregnant as a sophomore in college and remaining in school during her pregnancy.

She is now on the Dean’s List at YSU and said she believes she has proven people wrong through her perseverance.

“Growing up, my childhood was really rough,” Greathouse said.

She said she did not know her father and her mother was a single mom.

“It was really stressful for her trying to raise two kids. It was tough; there was a lot that happened in my life,” Greathouse said.

She said when she was between the ages of 13 and 14 she was homeless for periods of time. Greathouse said she had to live with a friend for a while due to problems at home.

“When I was 17, it just got so bad. I think from everything that happened with my family, it caused problems more with my mom where I couldn’t be [at home],” Greathouse said.

She said she became homeless and was living with different people. 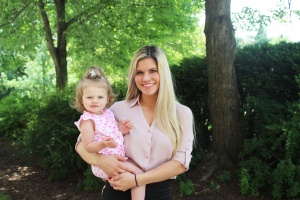 “Eventually, my school got involved, Salem High School, and they helped me get a place,” Greathouse said.

She said it was hard being homeless because she never knew where she was going to sleep and worked three jobs, all while trying to finish high school.

Greathouse said high school was difficult because people knew her situation and judged her. She said she took online classes her senior year and received her diploma.

She said she was able to persevere through the difficult times because she did not like her life and wanted to change it.

“I knew that wasn’t the life I wanted to live,” she said.

The Everett Greathouse Memorial Playground was made to remember those that were lost. A remembrance event was held at the memorial Thursday, where Greathouse spoke about her family.

Additionally, Greathouse said when she became pregnant, people told her that she was going to have to drop out of college and finish school at a later time.

Greathouse said a lot of people doubted her, but she proved them wrong.

“Three days out of the hospital, I came to school and I just started bringing her with me. She has been with me at school every day since,” she said.

Greathouse said mostly everyone is okay with her bringing her child to class, but in one instance a person said that Greathouse does not belong in the classroom.

She said she does belong at YSU because she has every right to get a degree, just as other students do.

Greathouse said her daughter is part of her motivation to get through school.

“I want her to know that if I can do it, she can do it. I just want her to have a better life than I did,” Greathouse said.

She said her fiancée, who she will marry next year, is another motivator.

“I don’t know where I’d be without him,” Greathouse said.

She said choosing positive people to be surrounded by has helped her succeed.

Greathouse said Ron Shaklee, chair of the YSU Department of Geography and Dawna Cerney, associate professor of geography, have been great motivators.

“Everyone in the geography department have helped me so much by allowing me to bring my baby. I cannot thank them enough because they really help me get through the semesters,” she said.

Greathouse said she began her college career as a business major at YSU, but when she took Bill Buckler’s weather class in the geography department, she found something that she was truly interested in.

She said her career goal is to become a weather reporter in the future. She will be working at WKBN in the fall as an intern with the weather team.

Shaklee said he is proud that Greathouse finds the geography faculty to have been a motivator for success at the university.

“Personally, I feel that Isebella has been a tremendous asset and role model for the faculty and students in the Department of Geography,” Shaklee said.

He also said he believes her backstory is amazing.

“Isebella is an incredible example of how drive, perseverance and the desire to follow one’s dreams can overcome the obstacles life places in our way,” Shaklee said.

Cerney said Greathouse is a “highly determined and focused student.”

She said as a student taking the “Human Impacts on the Environment” course, Greathouse was introduced to subjects outside of her interest area.

Cerney said Greathouse quickly recognized how the subject matter of the class related to her interest areas and career aspirations.

“She soon saw career areas expanding for herself, not only from a course she had no background interest in, but soon noted that all courses are expansive and grow her skills preparing her for changing job markets,” she said.

Greathouse said she has learned that success is not given, it is earned.

“The harder I work, the more I have coming for me. I have been working so hard lately and it’s really showing. I am so thankful,” she said.