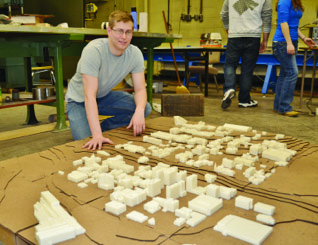 Ryan Lewis, a mechanical engineering major at Youngstown State University, has recently blown the minds of every person who enters Room 1470 in Moser Hall.

“I’ve never seen anyone do something like this before, and I’m proud of that,” Lewis said as he looked over his finished model.

Lewis, who graduates later this month, was approached by the Youngstown city planner, asking for a 3-D physical map of the city to be used in city planning projects. This model gives possible investors a chance to see what the city would actually look like if certain projects were to be carried out.

“That’s all I was given. They said they wanted a 3-D map, said, ‘Here’s the area that we want you to focus on,’ which was campus and downtown, and I got to work,” Lewis said.

Lewis used the maps on Google Earth to help get the images of each city building and brought those into a modeling program to compute the dimensions in the 3-D printer.

“There are 162 buildings. It took about 110 hours to model all of those and took two weeks to print them,” he said. “From there, I went and made a terrain map of the city, also pulled from Google. I made 13 layers and laser cut all of those out. This took another two weeks to do all of that, and then I put everything together. So, all together I think I spent 200-300 hours on the project total.”

David Deckant, fellow engineering major and friend, kept Lewis company while he worked on this project.

“I think it is really cool. I watched him design the stadium and the M-1 parking deck. Meshel Hall is probably my favorite,” Deckant said.

“When I would design a building, I would throw it at him and see if he could guess which building it was,” Lewis said.

“I got most of them right, too!” Deckant said.

“It’s not like there was a straight up guide on how to do something like this. There are people who have done things somewhat similar to this, but they’re all professionals,” Lewis said. “They do this for a living. I had nothing to start with. I didn’t have building plans. I didn’t have terrain maps. I had to pull all of them from the Internet and make them work.”

The idea behind the map is to make it changeable. There are 24 individual square blocks of buildings.

“Say we want to make a change to downtown,” Lewis said. “All that will have to be done is, whoever is working here in the lab at the time, will go through and redesign that layer and it will literally fit in that spot with the changes. So, say they want to add a giant building downtown. They will make the changes to the square, put it back in, and then when the city showcases what they are doing, everybody can actually see what the downtown area would look like if the building was there.”

Since 3-D printing technology is still relatively new, this project came with a price tag.

“Overall cost? I would say there is about $2,000 in material, which is an overestimate I am sure. There is probably about the same amount of cost in labor. Out of everything, the most expensive part was the plastic, and the only reason for that was because we used a professional grade printer, so we have to use their material, which is rather expensive,” Lewis said.

This project was a joint effort between YSU and Youngstown. The city planner helped in getting grants and investors to help put money into it. While YSU paid Lewis for working on the project, YSU donated his time to the city. Lewis described it as a joint effort by everyone.

“This was more fun than it was schoolwork,” Lewis said. “On top of working on this project, I also had to balance other contract work — other 3-D designs similar to this project but smaller, and work on and complete my senior design project, all while taking 21 credit hours and working two jobs. I am proud of myself that I am going to leave some kind of imprint in the city.”