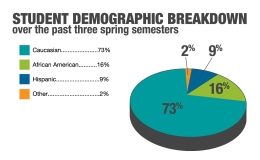 Deandre Radcliffe, a junior at Youngstown State University, admits that his family isn’t like the majority of African-American households.

The son of two working professionals, his father holds a Master of Business Administration degree, and his mother is a certified public accountant. Radcliffe, too, aims high. His parents weren’t pushy when it came to college, but they were supportive.

“It helps,” said Radcliffe, president of the Black Student Union.

Although he comes from Cleveland, Radcliffe said he’s fully aware of the imbalance between Caucasians and minorities at YSU.

YSU’s minority student population doesn’t reflect Youngstown’s, which has a near equal split between Caucasians and African-Americans.

Only 15 percent of the total student population enrolled this spring is African-American, down from 16 percent last spring. However, YSU has seen a 34 percent increase in minority enrollees over the past five years.

Since 2001, the number of minority students on campus has doubled.

Out of 293 public and 163 private nonprofit colleges, YSU ranked 20th from the bottom in graduating black students as a percentage of all graduates, according to a 2010 report by the Education Trust.

According to the report, YSU had the second highest percentage of black students, but the university graduated only 15.4 percent of blacks, while graduating 38.6 percent of white students between 2006 and 2008.

“One of the things that has to be done is give more attention to students of color,” said William Blake, student diversity coordinator. He said more support should be available for social needs.

A study conducted by the Office of Institutional Research at YSU revealed the five-year graduation rate for black first-time, full-time freshmen enrolling in fall 2005 to be 3.6 percent. Of those black students, 12.5 percent graduated in six years.

Yulanda McCarty-Harris, director of YSU’s office of equal opportunity and diversity, said gaps in achievement aren’t out of the ordinary in urban institutions.

“It’s an ongoing issue,” she said.

The Ohio Board of Regents has already put forth initiatives to speed up all students’ tenure, coordinating curriculums and removing remedial courses, which pushes the responsibility back on high schools.

Because 76 percent of current YSU students are from Mahoning and Trumbull counties, the local school system plays an integral part in collegiate success.

However, Youngstown City Schools ranked 807th in performance out of Ohio’s 936 school districts, according to the Ohio Department of Education.

Both city high schools are on academic watch or are in academic emergency. All other city schools indicated a need for improvement, at best.

Where YSU struggles is in the retention and graduation of minority students.

“People that are underprepared typically don’t go into their sophomore or junior years,” said Sue Davis, director of undergraduate admissions. “[Our] biggest problem is there are students coming here unprepared.”

Only the Youngstown Early College stood out as a secondary institution that succeeded in meeting academic standards.

Michele Dotson, YEC dean, attributes this to an increased drive among her students and a sense of awareness of the requirements needed to attain a degree.

Radcliffe said he believes that greater interaction between YSU and the city school system would foster better-prepared high school graduates.

“We’re not doing enough for local schools,” he said.

Radcliffe and the nearly 30 other members of the Black Student Union have plans to bring students from the city high schools to campus to familiarize them with the university system.

Radcliffe said the student union wants to start a scholarship that would give five or six students money to pay for application fees.

Jack Fahey, vice president for student affairs, said he is proud of the YEC and Upward Bound, a program that helps high school students assimilate to YSU’s campus.

“These are great partnerships,” Fahey said. “But we can always do more to get people onto campus.”

Fahey said he believes further involvement with the Eastern Gateway Community College would produce more-prepared and able college students, but EGCC’s growth was a large contributor to the enrollment decline in fall 2011.

Should ill-prepared students be required to attend the EGCC for remediation, Fahey said YSU would notice a decline in enrollment in freshman and sophomore classes.

“I’d be surprised if we don’t [raise tuition],” Fahey said about compensating for lost revenues.

Fahey said it’s hard to estimate the total effect because even the students coming out of the EGCC could attend regional schools that compete with YSU.

“Every university will increase their tuition to the cap that they’re allowed,” he said.

“We’re always going to compete with Kent [State University] and [the University of] Akron,” he added.

Indeed there is always room for improvement, and we need to focus on [centralizing] advisement,” Blake said.

“Diversity is what truly enhances the learning environment,” McCarty-Harris said.

“Now, this is not to say that we’re satisfied with where we are. Adding more students from across the world will help us grow as a university and produce better students.”