More than 11,000 walkers and runners participated in the Panerathon, an event whose purpose is to raise funds for the Breast Care Center at St. Elizabeth Hospital, hosted by the Covelli Centre on Sunday.

Panerathon’s goal is to give all women access to the center’s services regardless of their financial situations.

Joanie Abdu was a nurse at St. Elizabeth for over 20 years. In 1993, she was diagnosed with a severe form of breast cancer and died 15 months later.

Her husband, Dr. Rashid Abdu, started planning for the Joanie Abdu Comprehensive Breast Cancer Center (JACBCC) to give all women a place to have screening tests and mammograms done with a shortened wait time.

All proceeds from Panerathon support the Joanie’s Promise Fund to help the center expand their work.

Breast cancer survivor, Sheila Kroll-Dickinson, said she walks in the Panerathon every year to show her support and help raise money for JACBCC.

“Coming to the Panerathon every year and seeing all of these wonderful people here pulling together for us, it gives you the desire and will to fight and keep fighting every day,” Kroll- Dickinson said.

Candace Madden, Mercy Health Foundation employee, said millions of dollars have been raised for JACBCC and the number increases with each Panerathon. 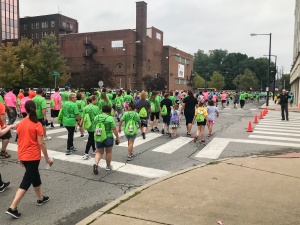 e money that’s been raised through the Panerathon and we have raised about [$500,000] this year,” Madden said.

Participants were able to run in the 10K or walk and run the 2-mile race. There was also a quarter mile PNC Kids Run, where children received a goodie bag and T-shirt.

The YSU teams have participated in the event for the past nine years. This year, YSU made one large team called Mega Team.

Mega Team consisted of 12 different teams that came together from multiple organizations at YSU. A total of 388 people represented the YSU Mega Team consisting of students, faculty and alumni.

Carrie Clyde, wellness coordinator at YSU, elaborated on how the idea of the Mega Team became a reality.

“In the past, YSU was represented with smaller group participation from different areas on campus,” Clyde said. “This year, the Wellness Champions Committee at YSU came together to host one big team called the Mega Team. Individuals who want to participate through YSU now have a chance to be a part of the fundraiser.”

Clyde said she hopes the students and faculty at YSU gained a sense of community, culture and a sense of coming together for something bigger than the norm.

Panerathon’s sponsors banded together to make the event a success.

Ashlee Mauti, director of marketing for Covelli Enterprises, said all the companies participating in the races compete to be in the number one spot for the largest team each year.

“Our platinum sponsors range from PNC Bank, the Debartolo Foundation, Huntington Bank, Rossi Insurance, Sweeney Chevrolet and many more,” she said. “They battle each year for the number one positions for the largest team. Youngstown State University, Sweeney and Team Peacock are some of the largest teams.”