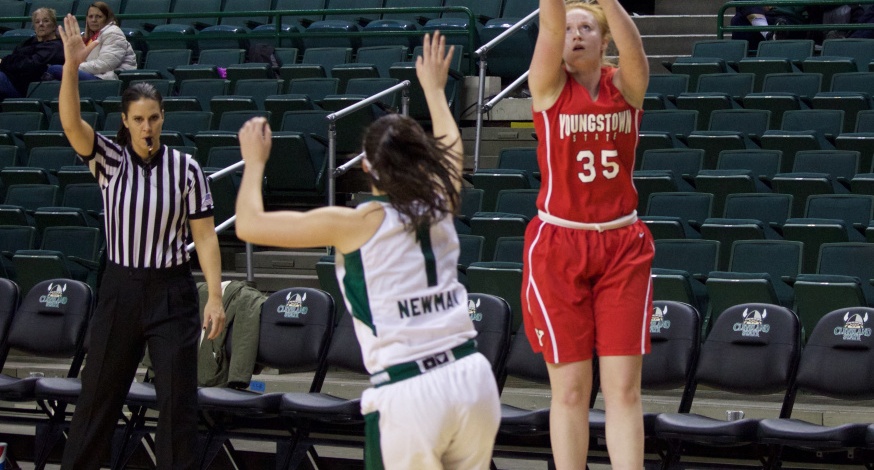 The Youngstown State University Women’s basketball team played possibly it’s sloppiest game of the year in a 75-68 loss to Cleveland State University. The loss drops the Penguins to 12-4 on the year and 3-2 in Horizon League play.

With just under two minutes left to play, YSU held onto a narrow 66-65 lead until Cleveland State’s Khayla Livingston grabbed a long offensive rebound and drained a three to give the Vikings a 68-66 lead. The Penguins followed with a turnover by guard Indyia Benjamin that resulted in easy points at the other end, and all but sealed the victory for Cleveland State.

YSU struggled with the Cleveland State defensive pressure all afternoon resulting in 18 turnovers by the Penguins. Benjamin and Nikki Arbanas particularly struggled when pressed committing three and five turnovers respectively.

The Penguins also had their woes shooting the ball from deep. YSU had numerous wide-open shots but failed to hit them with any consistency, shooting only 28 percent in the game and only 20 percent in the second half. YSU came into Saturdays contest averaging 8.6 three’s per game, first in Horizon League, but managed to only make seven against the Vikings defense.

“We need our best shooters to make shots and we didn’t,” Barnes said. “We’re not trying to miss shots, we’re not trying to get picked, it’s just sometimes it happens. It’s disappointing but hopefully we’ll learn from it and bounce back and have a good road trip.”

The Vikings were dominant on the offensive glass throughout, grabbing 16 offensive rebounds to YSU’s seven.

“They did a very good job. They’re very athletic, they’re quick and they rebound. And if you don’t play well your going to get beat,” Barnes said.

Cleveland State’s Ashanti Abshaw was a force for the Vikings throughout the night registering a double-double with 23 points and 10 rebounds. Abshaw also added three steals.

Sarah Cash led the way for the Penguins with 19 points on 7-8 shooting. Cash was the Penguins only threat rebounding the ball for much of the game as well, leading YSU with eight boards.

The loss marks the first time this season the Penguins have lost back-to-back games.

“You just try to learn from the film and get better,” Barnes said. “We know what to do. It’s just doing it and we need to get it done.”