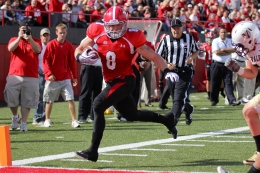 The Penguins bullied the Valparaiso University Crusaders for the second year on Saturday, winning easily, 59-0.

“It was a good home opener,” running back Torrian Pace said. “But we got journey. We got a mission.”

Prior to the game, the Penguins brought in the Rev. Lewis Macklin to speak to the team about its mission.

It took YSU only two minutes to get on the scoreboard, as Kurt Hess connected with Christian Bryan for a 24-yard touchdown. A minute later, Hess found Will Shaw for an 11-yard touchdown to make it 14-0. The touchdown was set up by a Penguins blocked punt, recovered by Ricardo Dixon.

YSU then made it 21-0 when Jeremy Edwards took a Crusader fumble 7 yards to the end zone.

“It was a great feeling,” Edwards said of the touchdown. “Last year, I had one but it got called back. This time I was like, ‘Don’t do anything silly.’ I just wanted to get to the end zone, go to the sidelines and not get yelled at by the coaches.”

Pace began the second quarter with a 3-yard touchdown run to extend the YSU lead to 28-0, capping a drive in which Pace totaled 50 yards. Pace led the Penguins for 146 rushing yards.

“I’ve been working hard, taking it one day at a time,” Pace said. “I’ve been taking all the criticism from my teammates and coaches. I’m just continuing to get better each and every day.”

After a Jamaine Cook touchdown run on the next Penguins possession, Demond Hymes scored his first career touchdown on a 1-yard run to make it 42-0. Another Pace touchdown run, this one of 14 yards, gave YSU a 49-0 lead after the first half.

“They came out and executed,” Wolford said of his offense. “That’s what we expect to do. We have a chance to be special, and we just want to keep those guys humble and working.”

The Penguins added two more scores in the second half: a David Brown 27-yard field goal and a Hymes 3-yard run. The final two quarters were played by the Penguins’ backups, with many starters being pulled midway through the second quarter.

Also in the victory, YSU managed to shut out its opponent for the first time since a 28-0 win at Indiana State University in 2009.

“I wasn’t aware of that, but hopefully there’s more to come,” Edwards said. “It’s good to see the improvements from last year. We’re definitely a better unit.”