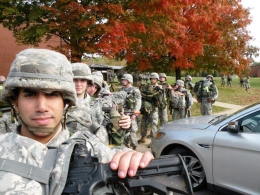 Sgt. 1st Class Rigoberto Torres from Youngstown State University’s ROTC has been elected into a private leadership organization within the U.S. Army.

Torres received a Purple Heart after taking shrapnel from an improvised explosive device to his shoulder and the back of his head.

“My injuries were not as devastating as losing life, limb or eyesight,” he said. “But they affect me as I see my brothers in arms with these types of injuries, and sometimes I ask myself, ‘Am I worthy for such a prestigious award?’”

The regional chapter covers ROTC programs in Indiana, Michigan, Kentucky, Ohio and Tennessee. Torres will be inducted into the club during a ceremony in Fort Knox, Ky., on April 30.

Torres is a senior enlisted instructor, and he teaches entry-level military science courses at YSU. He drew on his combat experience in Iraq to build his leadership skills.

“For me, serving in combat for my country was an honor, but also one of the scariest and emotional times of my life,” he said. “Combat is filled with uncertainty and a lot of mental barriers you, as an individual, have to overcome.”

Even with both good and bad memories of the military, Torres recommended programs like the ROTC to students who are looking to become leaders.

“Through classes and field training, we provide college students with the tools to become an army officer without interfering with their other classes,” he said. “ROTC also provides students with discipline and money for tuition while enhancing your college experience.”

Torres said the people he has come to know through the military have become more than co-workers — they’re comrades.

“I have made lifelong friends and have experienced an emotional roller coaster with these brave soldiers that will stick with me forever,” he said. “I have no painful moments, because I think things happen for a reason, and we, as soldiers, have to adjust and be prepared for the next day’s events.”