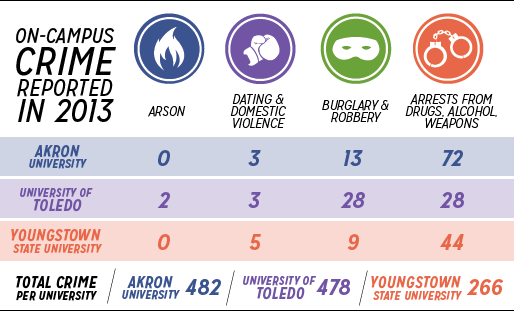 According to recent data from the Annual Security and Fire Safety Report for 2013, Youngstown State University’s annual crime statistics report were surprisingly low, especially when compared with some other public universities in Ohio.

Every year, all public universities are required to send out an annual report of on- and off-campus crime, along with fire safety statistics. They then must publish it, whether it is on the web or in print, under the Jeanne Clery Disclosure of Campus Security Policy and Campus Crime Statistics Act — a federal law that requires crime statistics every year from public universities.

The data is taken over a three-year span from these universities up to Oct. 1, 2014.

The data from these reports looks at three separate categories of crime: on-campus crimes, off-campus crimes at certain property controlled by the university in question and crimes that occurred on public property on, or immediately adjacent of, the campus.

In addition, the annual campus safety report at YSU looks at the additional categories of general theft, vandalism, simple assault and criminal damage and mischief.

Despite Youngstown’s state-wide reputation for crime, the total crimes reported for 2013 at YSU, under this report, were 266 — which is low compared to universities like Akron and Toledo, even when considering the student population differences. These numbers were published online, as well as in print.

John Beshara, Chief of YSU Police, said that the statistics help students become aware of what crimes are frequent on campus, which, in turn, helps students to prepare accordingly.

Beshara said that theft is the highest crime at the university on campus.

“Do we have crimes? Certainly we do. Do we have a lot of crimes? Not in my opinion,” he said. “The most crime we have is theft. It most often occurs because it is a crime of opportunity.”

Last year, a campus-wide survey about public safety was issued from the YSU Police Department. Survey takers generally rated the campus highly in safety and security.

Beshara said that public universities that over- or underreport in the survey are faced with heavy fines.

“If a college or public university is found over-reporting or underreporting … because we don’t want to get caught not reporting … there’s very steep fines for each violation so we take it [the Clery Law] very seriously,” he said. “Not only for our community but because if we do it wrong, it can really cause an issue with the U.S. Department of Education. That would hurt the university.”

Nancy Shefchuk, Police Sergeant at Kent State University, said that the crime ratings are typically lower for campuses in rural areas than in areas with a higher population.

“Let’s say Cleveland State, Akron, OSU, or an area that’s not a larger city — those campuses are unfortunately in areas that are really highly populated, and ours is not so much. It’s much smaller, and I think that certainly impacts crime stats a lot,” Shefchuk said.

She added that campus police have a minimal impact on the crime statistics, and the location of a university and the whims of local government can push the statistics one way or another.

“I’m sure to a minimum point they do, but things like the city environment certainly has a much greater impact on that. From what I know of other police departments and working with them, everyone is working hard to keep those statistics as low as possible — that’s certainly our jobs — and nobody wants crime to go up,” Shefchuk said. “I would think that the location and general crimes that are occurring in the area surrounding your campus, I would think that, unfortunately, becomes a reflection of that than some of the police efforts.”

Jeffrey Newton, director of public safety and Chief of Police at the University of Toledo, said that university campuses are generally safer than areas off of campuses, and this is a reflection of the overwhelming emphasis on safety most universities prioritize.

“Statistically, campuses are safer places than the areas immediately off campus. There’s an emphasis on having a strong security presence like you’ll see at a lot of the state universities, or a security presence at some of the smaller schools,” Newton said. “I think that that has been a priority in higher education, and also it’s an atmosphere where you have more educated folks and I think that you’ll find crime lower when you have a higher concentration of education.”

He said that he believes the campus police are why campuses are safer.

“I like to think that the campus police play a role in deterring crime and providing a presence that creates a safer environment,” Newton said.