A Youngstown State University professor travelled to Washington D.C. last month to speak to congressional leaders about the importance of science and why they should protect research funding and science education. 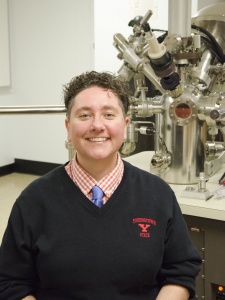 Snjezana “Snow” Balaz is the chair-elect for the Ohio-region section of the American Physical Society. The society held a congressional visit day on Jan. 25, and 53 APS members participated. It was Balaz’s first congressional visit.

Balaz met with staffers of Sens. Sherrod Brown and Rob Portman because those senators were away at a Democrat retreat. She discussed education with the staffers, and explained that the United States is behind other countries when it comes to progress made in education, science and research.

“I feel passionate about education because the more educated the citizens of the United States are at a young age, the more the whole country can prosper,” she said.

Also with the talk about education, Balaz said Title II and Title IV will strengthen STEM education in the U.S.

Title II and Title IX deal with funding for arts and sciences in higher education and federal student financial aid programs. Balaz brought them up and talked about how investing in education will help teachers get adequate certification.

“There are 37 percent of physics high school teachers who have a degree or some sort of certificate in physics,” Balaz said. “So, you can be in your high school and get taught by someone who doesn’t have any physics training.”

Another point Balaz brought to the new administration was that Ohio doesn’t have national labs, but YSU has infrastructure that can be invested in. She said buildings like Ward Beecher at YSU should be provided with better equipment and technology.

“My building for example, Ward Beecher, could get some updates so students can have a safe and comfortable environment to study [in] and I can have research capabilities,” Balaz said.

Balaz said countries such as South Korea are leading in research and development and have the highest gross domestic product. She implored the congressional leaders to invest in fundamental research. This will raise the Research and Development she said, which in turn raises the U.S. GDP.

“The way they can invest is by approving the budget and increasing it for the National Science Foundation and for the Department of Energy,” she said.

Balaz said it’s important to her that the country becomes educated in science. She said the country needs people who work in STEM to improve the country, like fixing infrastructure, for example.

“As a nation, if we have a scientific literacy, we will be one of the best countries because more innovation brings prosperity,” she said. “Also, more jobs and more money. When there’s more jobs you need the scientifically educated people to fill the jobs.”

Going on this trip with APS made a difference because she got to have productive conversations with senators and congressmen, she said.

“The congressmen and senators saw me as a person. I’m not just this scientist in a lab in the corner doing stuff,” she said. “I think it’s important we communicate with our government and citizens [about] what we do.”

That entails explaining the significance of her research, Balaz said. Learning about science also develops critical thinking skills, she said.

“When you learn about science you learn how to critically think and problem solve. Then you can tackle anything,” she said. “It can be hard sciences, it can be social sciences, anything in your life.”