Most recently, Leslie Cochran released a new series entitled the “Detroit Thorn Birds,” which is a historical fiction on the Detroit Mafia through the 1970s and the 1980s. He said from the time he was president at YSU to becoming an author, there was a little in between.

“I said ‘I’m not going to do anything, I’ve done my thing and I had a great career,’” Leslie Cochran said. “But, you know, sometimes you just can’t stop doing things like that and I already loved to write.” 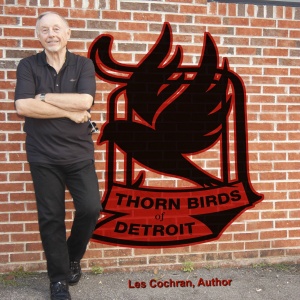 Leslie Cochran said he continued his writing after he retired by writing guest opinions and letters to the editor for a local paper, and had a friend say to him, “Les, you ought to write a story.”

“I said ‘but I don’t have a storyline,’” Leslie Cochran said. “He said ‘but you’re always telling these jokes about university presidents … being such nerds.’”

Leslie Cochran said his friend continued to persuade him to write, and he ended up writing fiction novels. He said he wrote his first piece of fiction in 2011.

“I had 500 pages typed and I didn’t know what to do with it,” Leslie Cochran said. “A friend of a friend said ‘I will read it and give you an evaluation.’”

Leslie Cochran said his friend, who was an English major who took five years to write her first book, read what he had written up and sent a five-page email back. He said she said ‘you write pretty well, but sociology papers don’t sell.’”

“She said ‘I like your story and if you’re willing to bear with me, I will be glad to tutor you,’” Leslie Cochran said. “It was painful, but the transition was significant.”

Leslie Cochran said he just started writing about the Detroit mafia because he lived in Detroit when he was doing his doctorate dissertation and teaching high school. He said those experiences gave him insights into the mafia.

“I love it,” Leslie Cochran said. “There’s so much research involved, I have a file cabinet full of information about the Detroit mafia.”

Leslie Cochran said a lot of people think Detroit collapsed after the riots in 1967, but there were a lot of people there trying to save their neighborhoods. He said as a teacher, he got to know some of these people and that is the genesis of the books he’s written.

“They’re kind of a unique group of people,” Leslie Cochran said. “I came up with the concept of the Thorn Birds.”

“I have rock and roll music from the ’60s on,” Leslie Cochran said. “That’s the period I’m writing about, and literally that drowns out everything else and I’m engaged in the room with the characters.”

Leslie Cochran said his mother used to say ‘if it comes easy, it isn’t worth doing.’ He said if you’re going to do it, then you have to do it right when it comes to being a writer.

“I think the first thing you do is you have to do it,” Leslie Cochran said. “You have to start.”

Lin Cochran, the wife and marketing personnel for her husband Leslie, said she is glad that her husband is doing this, and that it keeps him busy and his mind working. She said previously, in his retirement, she said he ran for political offices more than once, and she likes this a lot better.

“It was a struggle for him at first, but he had some good mentors,” Lin Cochran said. “He’s the kind of person that if he wants to do something, he learns how to it right.”