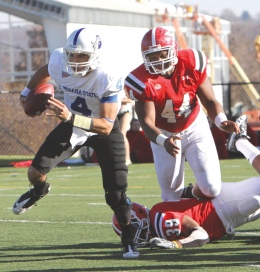 When Andrew Johnson decided to transfer to Youngstown State University, he thought he needed a change.

He said he made the right decision.

Johnson, a transfer from Bowling Green State University, came to YSU to play football, but he also wanted to increase his grade point average.

“Lets just say it was below a 2.5,” Johnson said. “I was a lot more immature, and a lot less focused on my grades. Here, it increased to just under a 3.5. It gave me opportunities I didn’t have.”

“We obviously have a great academic support system here,” Wolford said. “Sometimes people just need a change. I think he grew up and realized some mistakes he made in the past, and was ready to make a change in his life. It was a good thing he did before it was too late.”

Johnson will graduate May 19 with a sociology major and a human resource management minor.

“It was probably one of the best decisions I had made to this point in my life,” Johnson said. “It was a great experience. Every day was just good, based on the team and the people around it.”

In his senior season, Johnson started all 11 games for the Penguins, anchoring the defensive line. He finished with 39 tackles, 27 of which were solo. He also had 6.5 sacks and 11 tackles for a loss. His 6.5 sacks were the most by a Penguin in nearly 10 seasons.

“First, I would like to shout out my fellow defensive linemen, Obinna Ekweremuba and Daniel Stewart, because they were right there with me, and we anchored that defense,” Johnson said. “I believe we left our mark by beating the national champions. We were a team to be reckoned with. We weren’t no joke on the field.”

Johnson finished with two tackles and 0.5 sacks in the win against the then-No. 1 team in the country, North Dakota State University. The defense also recovered two fumbles. When Johnson was on the field, his leadership could always be counted on, Wolford said.

“He was voted on by his peers, and he was kind of like another coach for us on the field,” Wolford said. “He was a guy that was a catalyst for us on the defensive line. He raised the level of everyone else’s play.”

Johnson said he has been studying for the GMAC, which measures a student’s aptitude to succeed in graduate business studies, and the LSAT, which assesses prospective law school candidates.

“I’ll see what my grades are and what my options are when it comes to schools,” Johnson said. “As far as trying to pursue a career in football, I have been spending a lot of time doing that. I am just trying to juggle both, and it is tough, but it is fun, too. I am trying to play football as well, but that is just temporary.”

“He was just such an enjoyable person to be around,” Wolford said. “He was always studying film, always around the office. He is kind of a quiet guy. When the time was right, he would step up and say something. He was someone you could count on, and I really enjoyed being around him as a person.”