Paul Sracic, team coach and YSU chair of politics and international relations, said the ranking is a tribute to the students and shows how hard they worked to get where they are now.

“We have some of the best students in the country, the best pre-law program in Ohio and the U.S.,” Sracic said. “The fact we can go toe-to-toe with Ivy League schools and come out on top is very impressive.” 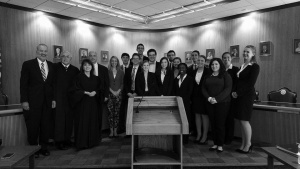 Moot court is a mock competition where two teams consisting of two members debate fictional cases against one another.

YSU began their moot court team in the mid 1990s and has continued competing for more than 20 years. Sracic has been in charge of the team since its inception, except for a five-year break period starting in 2009.

Last year, the moot court team ranked 11th in the nation and has since jumped five spots. Team members Samantha Fritz and Jacob Tomory finished in the top eight at the 2017 national competition.

Teams that they beat for the position included Texas A&M University, Duke University and Baylor University, among many other schools.

Marissa Snyder, president of the YSU Moot Court team and a member for three years, said moot court was the major reason she decided to pursue her education at YSU.

“I feel incredibly grateful and proud to be the president of a nationally ranked organization, and one that I feel so deeply passionate about,” Snyder said. “I’ve given hundreds of hours over the past three years to the team, both helping others and tending to my own arguments and performances, and I would gladly do that all over again.”

Fritz and Tomory are on their second year of the team. A former member of moot court, Jacob Shriner-Briggs, coached both Fritz and Tomory in speech and debate at Canfield High School, asking them to join the YSU team after they graduated.

Since then, the team has travelled across the country for competitions and to meet prominent lawyers and judges, helping the students network for future careers in law. One of these individuals was Mahatma Gandhi’s grandson.

Fritz, Snyder, and Tomory wished for the continued success of the team and hoped they can improve upon their performances in order to jump up places on the list.

“It’s actually kind of surreal. I love YSU and the different opportunities is has brought me, but going to a smaller school like this, I never expected to receive the national recognition that we have,” Fritz said.

When asked if the team will continue if the faculty go on strike, Sracic said a strike would not get in the way of preparation for future competitions. If necessary, he said, the students help coach others and could self-sustain the team.

The next event for the moot court team will be Sept. 18 at noon in the Board of Trustees room in Tod Hall for Constitution Day.