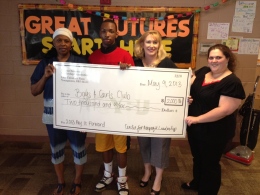 Melanie Costello, Jermaine Phipps and Rachel Kerns of the Boys & Girls Club of Youngstown, and Diane Doddato of the Youngstown State University Pay it Forward program pose with the check the Pay it Forward donated to the club. Photo courtesy of Laura McCaskey.

Six of Youngstown State University’s programs have been placed on the President’s Higher Education Community Service Honor Roll. The list was announced last week. The program began in 2006 and annually represents students and their institutions by recognizing their achievements in their community. This is the fourth year in a row that YSU programs have been named to the list.

The YSU Pay It Forward program earned a spot on the President’s list. Pay It Forward helps students learn how to be engaged citizens and understand the important role charity plays in the health of the community through specific goals.

The Pay It Forward program was able to donate $2,000 to The Boys & Girl’s Club of Youngstown, a regional non-profit organization. This money they donated was raised through various fundraising activities.

Laura McCaskey, the director of the YSU Center for Nonprofit Leadership, said she was proud to be apart of this award.

“It’s a big honor for Youngstown State to receive this honor once again,” McCaskey said.

McCaskey said the Pay It Forward program doesn’t plan on stopping there.

“As for the Center for Nonprofit Leadership’s contribution to the President’s Higher Education Community Service Honor Roll Award again next year,” she said, “we plan to continue the Pay It Forward Initiative and give a grant award in the amount of $2,000 again in the spring of 2014.”

The Upward Bound program is another YSU organization that received this honor. Upward Bound is a program that assists low-come and possible first-generation college students who are currently ninth through 12th grade.

Upward Bound works with the students through tutoring, Saturday school, summer school and ACT preparation courses to help them succeed in post-secondary education.

“We want the kids to go and graduate from college; that is our ultimate goal,” said Mike Kuzmish, Upward Bound’s coordinator.

As for the future, Kuzmish said it only makes sense to “keep doing what we are doing; we are doing something right.”

The Summer Bridge Program was also selected to be on the President’s list. The program, run by the YSU Center for Student Progress, is designed to make students who have already been accepted into the university more familiar with YSU.

Students involved take part in two fall semester mini classes, a study skills class and a series of workshops to learn about campus.

The program also meets with the students individually once a week to discuss managing their time during there freshman year at YSU.

Mike Beverly, senior coordinator of YSU Multicultural Student Services, said he is excited about being on the President’s Honor Roll.

“It gives the entire Center for Student Progress great recognition and shows that we are on the right track,” Beverly said. “Our goal is to be able to retain the same level of success in the future.” The Zeta Tau Alpha Pink Ribbon Cheer Classic, “JA in a Day” Junior Achievement elementary-school program and Academic Achievers are also YSU programs that made the list.