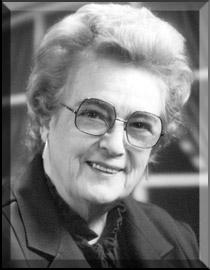 The campus community lost a valuable member on Sept. 28, when Mary B. Smith — a former instructor, administrator, recruiter and adviser to students (and much more)— died at Park Vista Retirement Community.

She devoted more than 40 years of her life to Youngstown State University, watching it grow from a small private college of 723 students to the much larger campus of 13,813 students that exists today.

“So many alumni revere her. … She has made a profound difference in so many students’ lives,” McFadden said. “I’ve known her since I was a student. She engaged herself in helping athletes and all students. I returned to work for the university, and our relationship took off.”

Smith arrived at Youngstown College with her husband, the late Joseph Earl Smith, in 1939, and she was employed as a biology instructor. A few years later, Smith became head of the department of health and physical education; she also served as the assistant registrar and the college field representative.

In the years before her retirement, she worked, at various times, as the college’s recorder, the registrar, the assistant to the dean of admissions and records, and the director of career planning and placement.

Jim Morrison, associate director of the Penguin Club, said he’s known Smith since 1966, when YSU was more like a family than a university.

Morrison said Smith was an avid supporter and follower of YSU’s athletic teams.

“She and her husband housed a number of the football players in their home back before dormitories were around. Many had mentioned how they opened their homes to the students,” Morrison said. “So much has changed, but she was an athletically inclined person all her life.”

In addition, Smith developed an efficient system to register and bill students — long before the existence of widely available and affordable computers.

“There was a group of university employees in the ‘60s that took trips to various universities to get ideas to develop the registration process,” Morrison said. “We visited the University of Dayton to develop ideas for registration.”

In 1970, Smith was listed in the Who’s Who of American Women. She belonged to the American Association of Collegiate Registrars and Admissions Officers, as well as the Ohio Associations of Collegiate Registrars and Admissions Officers. Smith was also an active member of the Penguin Club and the League of Women Voters, along with the patroness of the Sigma Alpha Iota Music Fraternity and a national member of the United Nations. Of the Tri-Sigma sorority, she was both a member and a college adviser.

In 2001, Smith was named as YSU’s Penguin of the Year, and she was inducted into the YSU Athletics Hall of Fame in 1990.

“During that time, things were very different than now. It was a very personalized system,” Anderson said. “You saw Mary if you needed a mentor, advisement, if classes you needed were closed and if you needed an exception made. Mary Smith did it all; she was very well known.”

During the 1950s and 1960s, Anderson said, all YSU correspondence likely had Smith’s name on it. Until approximately the past year and a half, Smith remained “quite active” at YSU, even appearing at the faculty awards two years ago.

Anderson said Smith will be missed by members of the YSU community, both past and present.

“If you talk to anyone who’s worked at YSU in the past 50 years, it’s a guarantee they knew Mary,” Anderson said. “She was certainly a wonderful lady.”