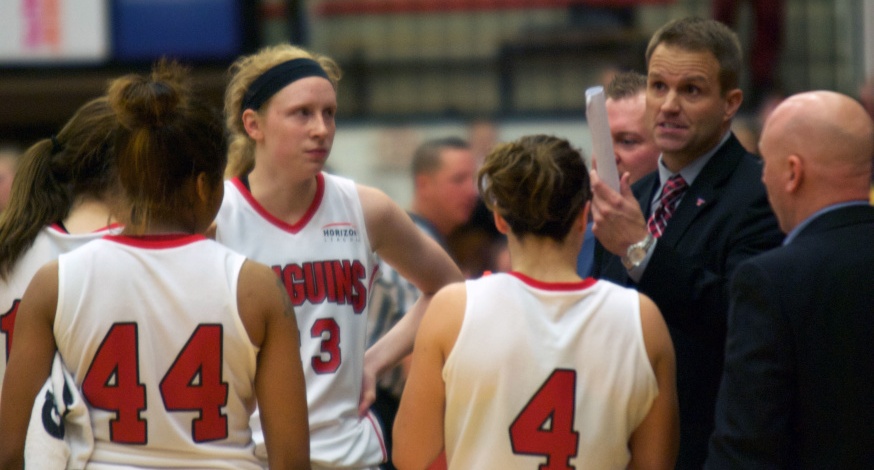 The Youngstown State University women’s basketball team hasn’t started 4-0 in back-to-back seasons since the 1975-76 and the 1976-77 seasons.

The Penguins have gotten off to a 3-0 start this season and will try to pick up their fourth win against Robert Morris University on Tuesday night. Forward Kelsea Newman said the 3-0 start to the season is impressive and the win in the season opener was a good test early in the season.

“I think after that first game, coming back from down 20, I think that’s really impressive that we stepped up and we came together and we were able to come back from that,” Newman said.

Robert Morris is coming off a 76-45 win over La Salle University on Saturday. The Colonials are averaging 83.2 points per game and they are shooting 39 percent from 3-point range.

“They are very talented. They definitely can score it well and they play good D. they pressure and deny and make things difficult for you. So it will be a challenge to say the least,” head coach John Barnes said.

YSU has won two of its first three games as a result of Sarah Cash’s success at the free throw line late in the fourth quarter. Cash gave the Penguins a 53-51 lead with less than a second left in the game in the season opener against Canisius College, and gave YSU a 54-53 win on Friday over Radford University.

“We’re definitely looking for her and trying to get the ball into our post players, whether it be Sarah [Cash] or Morgan [Olson] or Janae [Jackson] or Marissa [Brown],” Barnes said. “But down the stretch if we need free throws, we’re definitely gonna get it into Sarah’s hands.”

Newman said the competitive games the Penguins have played to open the season could prepare the team for conference play.

“I think it only prepares us for Horizon League play — every game there is going to be really close. All of the teams in the league this year are really competitive. So this is just preparing us for that,” Newman said.

YSU has an odd schedule this season. After the Penguins host Robert Morris, the Penguins will open Horizon League play on Saturday when they travel to Oakland University.

“We’re a little younger, but I guess it’s more of a challenge for us,” Barnes said. “But it definitely beats an alternative. We were gonna have to play like four games in seven or eight days — conference games — so it helps us in that sense…I’m not sure if its necessary an advantage or a disadvantage. …Obviously it’s very important for us because it’s a conference game, but in terms of the advantage, it would just be that we’re not overloaded right away when other teams would have had rest to play us.”

Barnes said the beginning of the season was a good test for the freshman on the roster. He said the team could build on the first three games of the season and see a confidence boost heading into the end of non-conference play.

“It gives them confidence. There’s a lot of unknown’s when you’re a freshman or haven’t played a lot and coming in,” Barnes said. “So I think it really showed that we’re able to fight and finish games. Our philosophy as far as being a tough and hard-nosed defensive team has paid dividends so far. Although that’s gonna be really challenged the next few games, so we’ll see how that goes.”