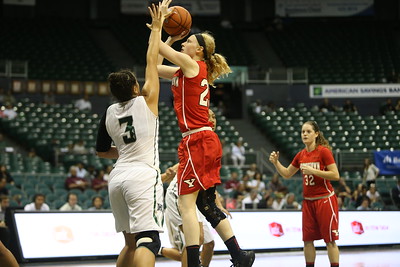 After a season riddled with terrible injuries and strange happenings, the Youngstown State University women’s basketball team is ready to go.

“We’re excited. We are still ironing small things out,” YSU head coach John Barnes said. “We had a really good scrimmage against Duquesne. They do a really good job on both ends so it was a good challenge for us.”

Arbanas tore her ACL before the year started and Cash played just 102 minutes due to a lingering knee injury.

“I’m really happy with the progress I’ve made and the progress the team has made so far. I’m looking forward to it all,” Arbanas said. “The extra time that the younger girls got on the court last year is invaluable. Being able to just be confident and knowing that whenever some of us have to have less minutes. Those girls will be able to keep the games close and defend well.”

Arbanas also said that she’s excited to be able to get back on the court with all her teammates and friends.

“I’m very excited. I haven’t been able to play with Nikki and Sarah a full year since my sophomore year,” Benjamin said. “When we were able to play together, we did big things. We had good chemistry and played an all-around good game. I’m just happy everyone is healthy and ready to play.”

Benjamin is slotted as the starting point guard for the fourth consecutive year. She was the only Penguin to start all 30 games last year.

Last year without Sarah Cash, freshmen center Mary Dunn stepped up in her role. She was voted the Horizon League Freshman of the Year. She led all conference freshmen with 11.3 points per game and a .514 field-goal percentage. With Cash back, anything can happen.

“I realized that I’ll probably miss this a lot more once I graduate than I thought I would,” Cash said. “Watching games from the sideline makes you see when people don’t do what they are supposed to. It helps when you go back to film and see what you missed before.”

In the preseason, YSU was picked to finish eighth out of 10 Horizon League teams.

“There are a number of players we can put in the game and we feel that we won’t have a drop off or a letdown,” Barnes said. “Nikki was a vocal leader and captain. To lose her, we struggled with who to look toward in a major role. Indiya Benjamin has done a great job. Sarah Cash isn’t necessarily a vocal leader but leads by example. The leadership they show is great on the court and off.”

With the season just around the corner, YSU will look to improve on who it was last year with just nine wins which included five conference wins.

Last year, YSU gave up 74.3 points per game and were also out-rebounded by near eight each game. YSU will need to clean those up to get more early season wins.

YSU plays its first game on Nov. 10 at the University of Pittsburgh at 7 p.m.