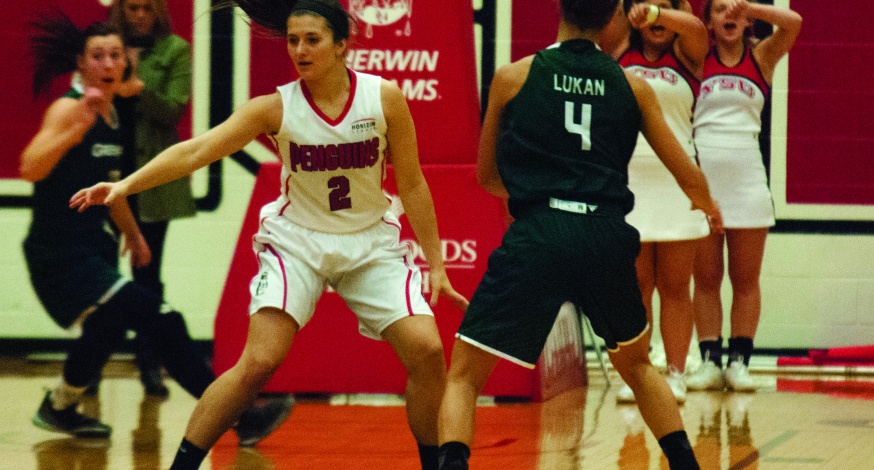 The Youngstown State University women’s basketball team is coming off a 68-60 loss to the University of Wisconsin-Green Bay on Saturday night.

After the game, YSU head coach John Barnes was disappointed with his team’s ability to execute plays. The Penguins had a nine-point lead over the Phoenix in the second quarter, but a slow start in the second half put YSU in a hole that the Penguins couldn’t overcome.

Now that a couple days have passed, Barnes said he’s had an opportunity to go over the film and he’s proud of the way his players were able to keep pace with the Phoenix, one of the top mid-major teams in the nation.

“I’m happy with the team and how hard we played,” Barnes said. “[We] stuck right there with one of the best programs historically in the Midwest and mid-majors, but obviously still disappointed we couldn’t find a way to pull out a win.”

Barnes said the team would have to use the loss as a learning experience and continue to improve as the season progresses. With a full week until their next game, Barnes intends to spend practice time going over the minute details that the Penguins need to improve upon.

“We’re just going to go back and refocus on the fundamentals on the little details,” Barnes said. “Sometimes those get away from you when you can’t do the drill work that you normally do when you have time to do it. So we’re really going to focus on those little details.

“We learned a lot from the last two games. [The University of Wisconsin] Milwaukee did a great job pushing us to the edge and Green Bay, we had to raise our level, and your mistakes and the things that you’re not good at really show brightly when you go against a team like Green Bay.”

YSU forward Kelsea Newman echoed Barnes’ thoughts on practice during this week. She said the team will review the film of the Green Bay game and make adjustments with the coaching staff.

The next game for the Penguins will take place on Saturday at Cleveland State University. The Vikings are 3-11 this season and 0-4 in Horizon League play.

Newman said YSU can’t overlook Cleveland State because the games between the Penguins and the Vikings are usually tough matchups.

“They’re always a big rival. Being so close, they’re always a good game to play and both teams are going to come out with a lot of energy — just intensity,” Newman said. “It will be a good way to see how we come back from the last game.”