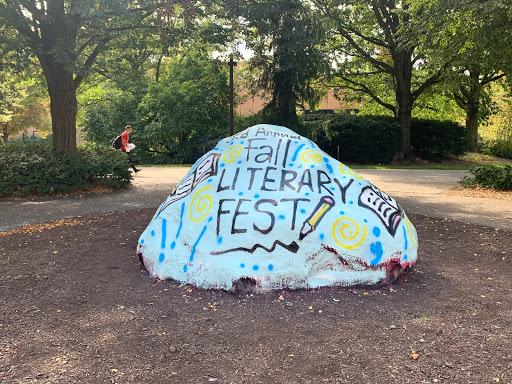 Youngstown State University hosted Lit Youngstown’s third annual Fall Literary Festival on Oct. 4 and 5. This event brought in writers, readers and literary enthusiast from across the valley as well as across the country.

Karen Schubert, the director of the event, put in countless hours of work to plan the two-day festival for over 250 attendees. The event featured 60 presenters hosting sessions focusing on readings, workshops, craft talks, panel discussions and a book fair.

This is the first time the festival had an overarching theme. The 2019 Literary Festival emphasized cultural identity and tailored its speakers and workshops to fit this theme.

“Our focus this year is cultural identity in writing and publishing. How are marginalized voices being represented? Who is in the conversation and who is excluded from that conversation? How have monstrous-sized big businesses had an impact on who and what gets published? Do we have access to writing not in English?” Schubert said, using rhetorical questions to explain what the theme conveys.

The festival’s first day took place throughout Kilcawley Center with a reading at St. John’s Episcopal Church that evening.

The next day, readings were hosted at the DoubleTree with keynote speaker George Ella Lyon, who has written for decades on Appalachian identity.

Lyon’s most popular work is her poem “Where I’m From,” which is often used in English classes and workshops as a template for individuals to turn their own life stories into a poem.

Kari Gunter-Seymour, an Appalachian writer, also held a poetry workshop and a reading at the event.

“I’m hoping to bring a little Appalachia to northern Ohio because I think some of our people up here forget that the lower portion of Ohio is Appalachian,” she said.

“I am so excited to be here and bring that voice because I don’t know if that voice gets to be heard much here in the North,” Gunter-Seymour added.

Her workshop focused on building tension and using meditation techniques to encourage all of the senses to conjure how to express tension and fear.

“Everything we experience ourselves, as human beings, can be helpful to others. When we learn to tap into [tension] and put it into our work, we aren’t only helping ourselves by getting it out of us, but we’re helping other individuals who might be experiencing the same thing,” she said.

The festival offered free registration to YSU students, and many literary-loving students attended the event for class requirements or as an appreciation of the craft.

Reilly Fryman, sophomore English major, and Faith Patton, freshman sociology major, were attending the event because of their women in literature course, but they wanted to attend the event regardless.

Patton plans to switch her major to English for the upcoming semester. The two were waiting to attend the creative nonfiction writing workshop hosted by Erica Cardwell.

“I think one of the reasons I decided to come to this session specifically is because I really like to write, but I haven’t written in a really long time. This seemed like the perfect opportunity to jump back in,” she said.

The next reading will take place Nov. 6 at 7 p.m. at the Soap Gallery, and the next critique group will be Nov. 21 at 6 p.m. at St. John’s Episcopal Church.