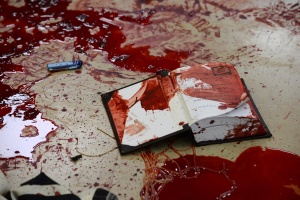 Blood stains the floor of a synagogue where at least four Israelis were killed and eight injured by two Palestinians armed with a pistol, knives and axes. Suffering on both sides of the Israel-Palestine conflict is evidence of the violence spreading through the region. (Kobi Gideon/Rex Features/Zuma Press/TNS)