Opoku Minta-Afari, an international graduate mathematics student at Youngstown State University, won first place in the LewerMark Scholarship contest for his essay on how he will make the world a better place. 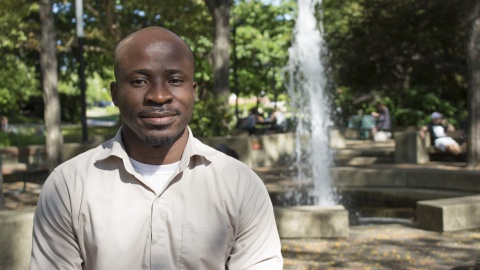 Minta-Afari attended Kwame Nkrumah University of Science and Technology in Ghana, where he received his actuarial science degree in 2010. He moved to Youngstown last fall to further his education.

He grew up in a low-income region of Ghana, where he suffered from polio and leg paralysis at a young age. Minta-Afari said growing up in this environment influenced him.

“One way that I think it has helped me is in finding a way of thinking about how to overcome any challenge that you come across,” Minta-Afari said. “It makes you more innovative.”

Overcoming these obstacles helped him find success in the United States.

“When you transition from such a situation, or such a country, to a place with so many resources, it’s quite easy to succeed if you just look out for opportunities,” Minta-Afari said.

In his essay, Minta-Afari said he plans to pursue a career as a health actuary. Living with the challenges of accessing health services encouraged this career choice, and he plans to use his education to develop affordable and efficient health insurance products.

Minta-Afari chose YSU after it was recommended by one of his favorite math professors, Emmanuel Harris. YSU’s mathematics program research and the low cost of living in the area also influenced his decision.

“He came back to Ghana to lecture, and I was quite close to him,” Minta-Afari said. “When I discovered my plans to further my education outside Ghana, he recommended YSU.”

Minta-Afari is the current organizing secretary of the African Students Union at YSU. Nathan Myers, the associate provost of International and Global Initiatives, said the entire YSU community is honored to have Minta-Afari.

“Mr. Afari represents our hard-working YSU students who go the extra mile to reach successes both in the classroom and beyond.” Myers said.

This is the first time an international student from YSU won the LewerMark Scholarship contest in the 11 years it’s been running. President Jim Tressel said he was proud of Minta-Afari for his accomplishment.

“It was really a feather in the cap of Youngstown State University,” Tressel said. “I had the chance to be there at the little press conference for [Minta-Afari], and to be singled out amongst all the international students in our country is a special thing.”

Minta-Afari said he was excited when he learned that he won first place.

“I was hopeful that I’d win, because I felt I had a compelling story and it’s related to the topic that LewerMark brought up,” Minta-Afari said, “but obviously it was a surprise.”

He is expecting to receive about $1,000 from the contest. Minta-Afari said the recognition meant more to him than the monetary prize.

“Someone can read your story, read what you have to say and relate to it, so it was exciting,” Minta-Afari said.

Minta-Afari said he has enjoyed living in Youngstown since last fall.

“Youngstown is great,” he said. “Especially for international students, it’s a great place to start your life in the states. You don’t get too overwhelmed, unlike the big cities.”

The friends he met at YSU within the first month made him feel at home.

“That’s very important to me, because I think when you leave your family environment and you go somewhere you don’t know anything about, you need people who want to make you feel at home,” Minta-Afari said.

When asked what advice he would give to other international students, Minta-Afari said it is important to engage in the society he or she moves to.

“You’re able to fit in better, and the people you’re with understand where you’re coming from, so they treat you better,” Minta-Afari said.