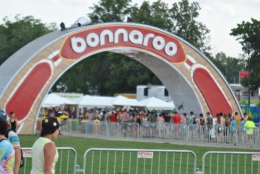 The former McAllister Farm resting in Manchester, Tennessee, is an uninhabited 750-acre pasture of long fields and trees. For four days every June, the farm evolves into the Bonnaroo Music and Arts Festival, a massive music festival, packed with nearly 100,000 attendees.

The Mahoning Valley will be well represented by more than 50 Valley residents making the nine-and-a-half hour drive to Manchester. Two of those residents are Youngstown State University students, Joe Garwig and Emarie Bees.

Garwig, a student of the YSU Dana School of Music, is driving down with close friends and his Knowledge Dropout band mate Matt Moderalli. Garwig said he is heading to the festival for his third year because he wants to see this year’s performers in the Bonnaroo atmosphere.

“I went in 2008 when I was 18. I went back last year and asked myself, ‘Why haven’t I been back in 4 years?’” he said. “It’s expensive, but if you add up the dollars and cents towards all of the bands you want to see, it’s definitely worth it.”

The festival will offer headliners Paul McCartney, Mumford & Sons and Tom Petty & The Heartbreakers. Other performances include: Bjork, Wilco, R. Kelly, The Wu-Tang Clan, Passion Pit, The XX, Nas, Kendrick Lamar and A$AP Rocky, along with many well-established names and upcoming performers.

Bees and five of her closest friends began their road trip Wednesday morning at 7 a.m. She said her friend Anna received tickets for her birthday and convinced her to make the trip.

“I hate long car rides, but I made CDs for the ride down, and I’m bringing my Kindle,” she said.

Bees said the performances she is looking forward to seeing the most are Portugal, The Man; Pretty Lights; Tom Petty and the Heart Breakers and Of Monsters and Men.

The bands Garwig looks forward to seeing the most are Animal Collective, Bjork, The Dirty Projectors, Grizzly Bear and Paul McCartney — “he’s a Beatle.”

“Its really eye-opening as a musician to see how things are done professionally,” Garwig said. “Getting there isn’t ‘making it,’ but it’s inspiring on the kind of grounds where you realize, ‘Damn, I gotta start cracking and get my sh—t going.’…Especially seeing people my age, 23, I gotta get something going.”

Since its debut in 2002, Bonnaroo attracts nearly 90 musicians and performers every year. Big name performers in rock ’n’ roll, along with dozens of artists in complementary styles such as jazz, Americana, hip-hop and electronica, among others.

With a non-existent advertising campaign, the first festival sold out in nearly two weeks. By 2003, Rolling Stone magazine named the Bonnaroo one of the “50 moments that Changed Rock & Roll.”

Back in the day, New Orleans blues singer Dr. John coined the term Bonnaroo. It’s slang meaning “the very best on the street” from the French terms “bon” and “rue,” the English equivalent to good and street.

According to reports in 2011, the event generates more than $20 million annually into the local economy. The festival also contributed more than $1 million to charity groups in Manchester and surrounding Coffee County.

Garwig said the festival lives up to its name and then some. He said to generalize anything about Bonnaroo would be “cutting it short” and “undermining the idea of fest.”

Despite witnessing a few audience members passing out in front of him, Garwig’s best memory of the festival was seeing Radiohead play “Idioteque” live.

“The way I was affected by it — it was too much,” Garwig said.