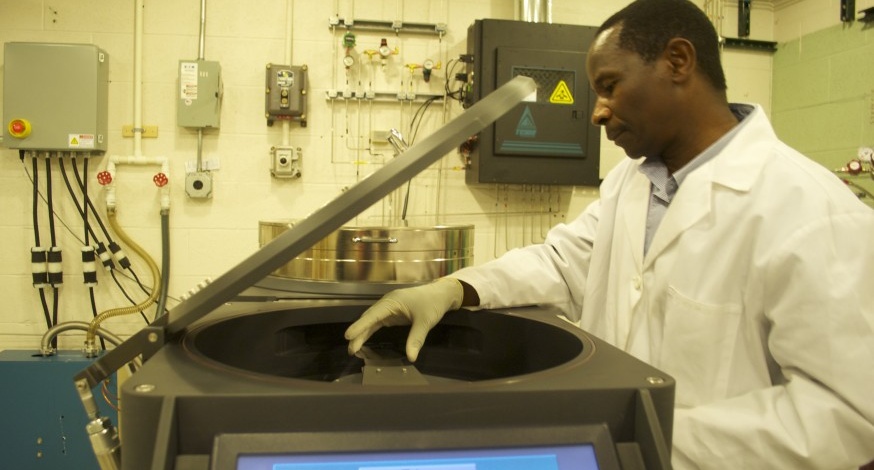 Oder is the lead investigator on the grant. Professors Pedro Cortes, Ruigang Wang and Virgil Solomon are co-investigators alongside Klaus-Markus Peters, director of engineering at Fireline, Inc. — a local manufacturing firm.

The system will be used for interdisciplinary research, including Oder’s research on building semiconductors and other tools, and to teach students — graduate or undergraduate — through hands-on studies in the classroom.

Gregg Sturrus, interim dean of the College of Science, Technology, Engineering and Mathematics, explained how the system works.

“It uses plasma — a highly iodized gas, like a flame in fire — inside a vacuum chamber to deposit materials on pure silicon wafers,” Sturrus said.

Hard materials like metals and rocks can be placed into the vacuum chamber and the plasma falls on top of it, chemically etching into layers of the material.

“Particularly, we want devices that can function at high temperatures,” Oder said. “We are going to use this machine to help get to more complicated devices, because previously we didn’t have it, so we were limited.”

He also emphasized that students will be involved.

“In this case, this is not only research, we are training students. Science and engineering students will get to use the system in class,” Oder said.

Oder said this is the third time in a row that the National Science Foundation has awarded YSU a grant for scientific equipment. The success rate nationwide is between 10 and 15 percent.

“[Given] that we’ve been awarded successfully three times in a row, it makes us unique. We’ve built a winning team,” Oder said.

“Dr. Oder’s past success in developing and patenting his inventions is the best indicator of the likely far-reaching impact that the new etcher could have in his capable hands,” Andrews said.

Sturrus said the system could allow Oder to build on earlier research.

“Dr. Oder has developed a semiconductor that operates at much higher temperatures and does not need the cooling used in [traditional] systems,” Sturrus said. “Similar processes could be developed to make full PCs that could withstand more extreme conditions.”