Ohio Gov. John Kasich signed a bill in December 2016 that made it legal to carry a concealed weapon at Ohio college universities.

However, the university board of trustees must vote to allow concealed firearms on campus. 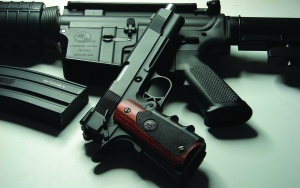 The Student Code of Conduct states, “Illegal or unauthorized possession of firearms, fireworks, explosives, other weapons, or dangerous chemicals on University premises or use of any such item, even if legally possessed, in a manner that harms, threatens, or causes fear to others.”

According to Cleveland.com, all Ohio public universities still prohibit guns on campus as of March 2017.

An Ohio law began on March 21 that allows employees with concealed carry permits to keep their guns concealed in their car, even if their workplace bans weapons inside their businesses.

“This law allows for an individual to have a gun locked in their private vehicle,” Tirone said.

The YSU Police Department will enforce the law, Cole said.

“I believe university policy does not allow weapons on campus. So since we are very much a part of this campus, that is our policy,” Lt. Col. Joseph Paydock said. “The ROTC program has no special provisions or special permissions to carry weapons on campus.”