Participants in the Youngstown State University’s Rally Against DeVos gathered on Jan. 31 at the Beeghly Hall of Education to share their disapproval with President Donald Trump’s secretary of education then-nominee, Betsy DeVos.

Chris Anderson, a graduate student at Youngstown State University and president of the Mahoning County Young Democrats, said DeVos was unfit to be the secretary of education because she has no public school experience.

“[She] has never taught in a public school, she’s never been a public-school administrator and that’s the person we’re supposed to trust to make sure that every American child has the same opportunity I did,” Anderson said. 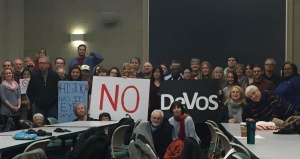 Anna Maria Jadue, a YSU senior majoring in both music and English education, said that the public school system should address underachieving students and also students that excel.

“The way that she wants to implement her ideas into the school system would prevent especially lower class and impoverished and under achieving students [from having the] opportunity for a higher-level education of any kind,” Jadue said.

Public schooling and federal assistance helped students like Anderson by giving them opportunities he said they wouldn’t have had otherwise.

“I don’t think it’s exactly a crazy notion to believe that every American student no matter their familial status, their economic status or their social status deserves to have that same opportunity,” Anderson said.

Sarina Mauerman, a YSU student majoring in early childhood and special education, said that she was at the rally to voice her opinions on DeVos potentially harming the IDEA program designed to help special education students keep up with their counterparts in the classroom.

“I think that once we take IDEA away from them and their parents, [special education] students don’t have accurate representation …,” Mauerman said. “Students with disabilities were actually put into segregated rooms and were not actually taught, they were almost just babysat and watched over.”

In addition to those concerned about how DeVos might handle K-12 students, many at the rally were equally unnerved about her take on, or absence of, higher education.

During her Senate hearing, DeVos admitted that herself nor her children have ever applied for financial aid, something that Anderson said is highly disturbing.

“I can’t even tell you how nominee DeVos can change the higher education experience because much of her hearing was focused on K-12,” Anderson said. “… more than eighty percent of all students need some form of aid. Isn’t it important that we at least have a secretary of education who knows what the FAFSA looks like?”

Marissa Gray, an undergraduate student at YSU, said that she attended the protest to defend the need for Title IX, which provides counseling, protection and legal infrastructure to students affected by harassment, discrimination and gender violence.

“If you need reproductive health care or if you need abortion or a screening … after an assault the state is obligated to provide those,” Gray said. “If you need a rape kit after sexual assault, it is free of charge to you. You also get an accompaniment to come to the hospital with you as well as come to court with you if there’s family issues or if the assault was in the family.”

Gray explained Title IX services make sure students affected by gender related offenses can continue to receive education and prevent conditions like PTSD and physical health issues from causing them to drop out.

“I know those rights are not only imperative but they are lifesaving,” Gray said. “Pursuing an education without those rights is impossible due to mental health issues or triggers that occur in the environment.”

Attendees of the Rally Against DeVos made sure their voices were heard not only locally, but statewide by using their smartphones and mobile devices to send video messages to Ohio Senator Rob Portman.

Despite complaints nationwide, DeVos was appointed as Secretary of Education on Tuesday.