Crime rates on campus have fluctuated in some areas throughout the past several years, but this fall semester has been tranquil, according to 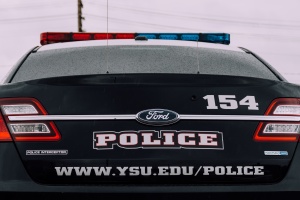 “Our main goal is zero crime. Anytime we have something it’s kind of a failure for us so we do look at the statistics once in a while, especially when we have to turn them into the Department of Education,” Varso said.

Varso believes robbery crime rates have declined. He said burglaries went up by one and there was an increase in incidents of dating violence stalking.

The YSU Police Campus Safety and Fire Report shows that between the years of 2013 and 2016 there were six reported rapes on campus, five of which took place in residence halls. Twelve robberies and 11 burglaries were reported on and off campus during this time.

Varso said there is a continued problem with petty theft year after year on campus.

Reports of stalking on campus and in residence halls have gone up since 2013. There was only one report of stalking in 2013, in 2014 that number raised to seven. In 2015 it dropped again to three reports, but increased by more than double in 2016 with a total of eight reports.

“Usually a student in Kilcawley Center or in the library will leave their book bag unattended, just leave it sitting there and what happens is someone comes takes the book bag or they lay their phone down and they’ll pick up their phone. It’s crimes of convenience,” Varso said.

Varso said they try to educate students on holding onto their belongings, bags, items and purses and to be aware of their surroundings. He also saidif you don’t get a Penguin Alert on something it’s usually a good thing because whenever they put the alerts out it is generally for something bad.

“For the most part it’s been relatively quiet and we’ve had some parties off campus and things like that, but nothing that would rise to the level of putting an alert out,” Varso says.

Varso says they’ve been lucky this year so far with no reported robberies on and off campus compared to recent years where there were some.

Varso said they still don’t have a large majority of students signed up for Penguin Alert and that a lot of students are signed up with their emails, but they have to go into the system and put their phone numbers in there to actually receive a text alert.

Ron Cole, public information officer at YSU, said the Penguin Alert System has been out for months now.

“The new system is quicker, more efficient and flexible. So far, we think it’s been very effective,” Cole said.

Cole said only one Penguin Alert has been sent out this semester, regarding the death at Stambaugh Stadium. The YSU Police Campus and Safety Report states between 2013 and 2016 there were three fire reports on campus andzero reported deaths due to fire.

Chris Eicher, a student worker at the YSU Student Security Service says the service offers transportation for injured, disabled, senior citizens and any students who don’t feel safe on campus.

“We take people from class to class and from their car to class and basically any other needs they will need during the day. Mainly, we do a few professors and some students and take them from their class to their car at night, just as a safety concern,” Eicher said.

Varso stated if you witness a crime on campus don’t hesitate to call YSU police and says students should keep the YSU police number on speed dial for whenever they may need it.