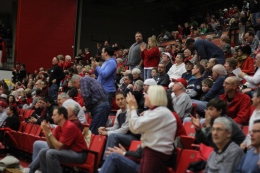 Beeghly Center was filled with fans on Saturday as the men’s basketball team took on the University of Detroit Mercy. Photo by Dustin Livesay/The Jambar.

“I try to come out to the games, especially this season,” Allard said. “I’ve been to a good amount. The team is fun to watch.”

Allard is not the only fan who enjoys watching. Attendance has been up for the YSU men’s and women’s home basketball games this season.

“If we have more bodies in the Beeghly Center, from a marketing standpoint, it’s a successful season,” said Rick Love, associate director of athletics.

Attendance is not the only increase the basketball teams have noticed. Wins have also risen. This correlation is not a coincidence, said Love, who oversees the marketing and promotions department, as well as ticket office operations.

“There was a buzz in the community,” Love said about the teams’ success. “When a team is playing well, people want to come see them. I think it dawned on people, ‘Hey, the Penguins are playing pretty good.'”

The timing of the games helped draw fans, Love said.

“Once the football bowl games were over, and the kids came back to class, it was like, ‘It’s basketball season now,'” Love said. “We had three great games in January and a sellout against Cleveland State. Then we had 4,000 for Butler and almost 4,000 for Valparaiso [in February]. It was a timing thing.”

The game against Cleveland State University on Jan. 28 attracted 6,313 fans, the fourth-largest crowd in school history. Joel Davis, a junior at YSU, attended the game.

“I know a lot of players on the team, and I go there to support them and YSU as a whole,” Davis said. “I feel like if you’re part of the school, that’s a good way to get out and be involved.”

The team has already compiled 10 wins in the 2011-2012 regular season, and Love said that fans were excited to cheer for a winner again. The Penguins earned just nine wins in the past three seasons.

“This was a team two years ago that didn’t win a game,” Love said. “Now, they were playing good. The fans were getting pretty excited and came out to watch.”

“I like to watch good college basketball and show school spirit,” Panormitis said. “The games are exciting, and it’s a fun atmosphere to be in.”

The largest crowd of the season for the women came on Jan. 28. The game against Wright State University, which was the opener to the men’s game, drew an afternoon crowd of 2,417 fans.

Kids Day, marketed to bring children to Beeghly Center, was the promotion for the doubleheader. Love said this promotion was helpful in drawing the season-high crowds. He added that the marketing team always works hard to attract fans.

“I think we do a good job of getting out there and letting fans know about our promotions,” Love said.

Still, Davis said the best promotion is a winning team.

“The community of Youngstown likes their teams, and they’re here to support them no matter what,” Davis said. “But winning’s just more enjoyable.”