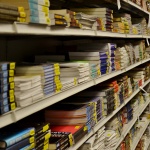 Correction: Connie Frisby, president of Youngstown State University’s Association for Classified Employees union, did not provide The Jambar with the email quoted in this story. The story previously said that members of the YSU-ACE Union were “concerned,” but that sentiment was not conveyed by the email.

Barnes and Noble has been selected as the vendor of choice to replace Youngstown State University’s campus bookstore pending negotiations.

The university issued a request for proposals in December. They received four proposals and both Barnes and Noble and Follett Higher Education Group made oral presentations.

Neal McNally, vice president for finance and business operations, said Barnes and Noble’s response suggests they would provide a better return to the university than the current campus bookstore, which generates a surplus of about $500,000 annually.

“We have selected Barnes and Noble,” McNally said. “However, we are still in negotiations with them to see if we can come to an agreement favorable to YSU.”

The university fielded proposals for private operators in response to a provision in Gov. John Kasich’s task force for affordability and efficiency in higher education. The task force requires state universities to submit an efficiency review by June 30.

“It advises campuses to evaluate their assets and operations and look for opportunities where it may make more sense to privatize,” McNally said.

He said the bookstore was a natural opportunity to explore, given that many campus bookstores across the country have been outsourced.

According to an email sent by Connie Frisby, president of YSU’s Association of Classified Employees union, to members of her organization on Wednesday, the university notified both YSU-ACE and the YSU’s Association of Professional and Administrative Staff union of its intentions in February.

The email states that the university gave YSU-ACE 10 days to offer an alternative solution, and the solution they proposed was rejected. According to the email, current employees will be given first consideration for jobs with the sub-contractor. It also states that they will be given 14-day notice prior to the termination of their contract.

In an earlier interview with The Jambar, McNally said the commissions the university would receive from the bookstore would need to be comparable if not better than the $500,000 the current bookstore generates.

He said making the switch to a private vendor could positively impact students in several ways.

“By shedding what is essentially a retail operation, YSU would also be shedding a considerable amount of expenditures,” McNally said. “That would enable us to redirect resources to other areas of the university.”

He said Barnes and Noble’s proposal also offered to provide no less than $5,000 per year in student scholarships as well.

Given that Barnes and Noble has a larger market presence than the campus bookstore, that would increase their ability to purchase textbooks in larger volumes, which should in theory reduce costs to students.

While the university is still in the middle of negotiations, McNally said he is confident they will come to an agreement.

If they succeed in finalizing the agreement, McNally said it would ideally take place over the summer, so things are in place when students are purchasing textbooks for the fall semester.

“We want to do things as soon as we can, so we ensure a smooth transition for our students and faculty,” McNally said.