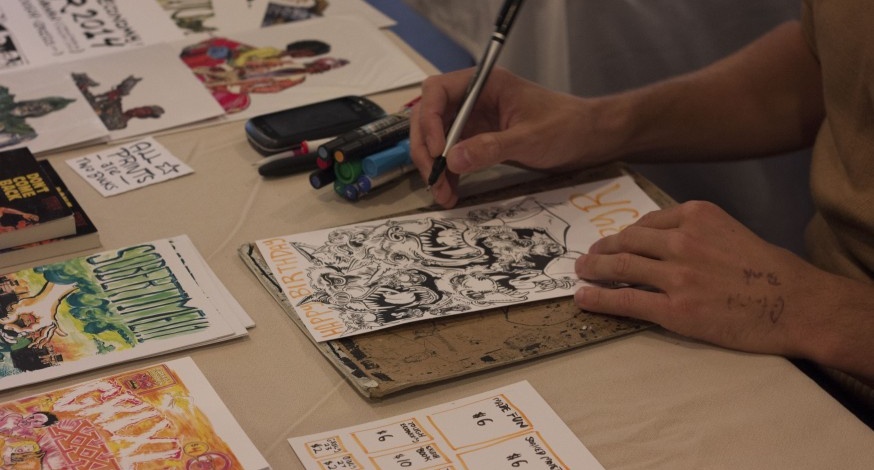 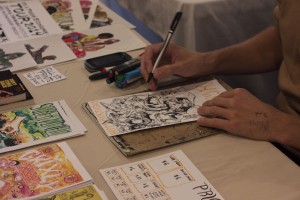 YO-Ice gathered independent, small press creators and gave them a space to showcase their works — the first event of its kind in the area. Artists and publishers from Ohio and Pittsburgh participated in the event.

Carlos Rivera, a Youngstown city policeman who wrote, drew and self-published his own comic, organized the event.

From Rivera’s experience with comics and his becoming a policeman came the comic “Newtown P.D.,” a somewhat autobiographical, comedic look at a rookie cop’s first year on the job in a city with a once thriving steel industry.

Around 15 years ago, Rivera wrote and drew three issues of “Newtown P.D.,” selling it to only friends initially. But then he heard of a small press expo in Columbus called S.P.A.C.E.

“I sold it that first year [at S.P.A.C.E.],” Rivera said. “I got to know that there’s this whole other world out there — people producing their own work. I’ve gone to S.P.A.C.E. over the years, but because of time and work I’ve never really got to do much more of my book.”

Rivera said that people are still asking for the fourth issue of “Newtown P.D.”

Diluvian Enterprises is a small press from Kent run by Nate Dray, a YSU graduate. Diluvian publishes Dray’s comic “Epic Earth,” a series of stories focusing on “science, mystery and the unknown,” and “Ort,” a collection of cartoons from entertainer Robbie Vegas.

YO-Ice booked Ted Sikora, the director of “Hero Tomorrow.” “Hero Tomorrow” is a feature film that provides a new take on the superhero story. It debuted at Comic Con International.

Bob Corby is the proprietor of Back Porch Comics, a small press publishing works since 1987. He is the founder and event organizer of S.P.A.C.E. and had a table promoting upcoming events in Columbus.

“Carlos had come to S.P.A.C.E. once or twice before and wanted to get something started up here in this corner of the state,” Corby said. “I’m always for trying to promote this kind of stuff. So, I told him I’d come up and do what I could to spread the word.”

Corby previously spent time in Youngstown while working at his other job as a structural engineer, but never on comics business. He attends events similar to YO-Ice in and out-of-state all year, hoping to have con-goers converge in Columbus for S.P.A.C.E.

“Once something happens like this, the word spreads on the grape vine, especially now with social media,” Corby said. “People say, ‘I was here. I had a good time,’ and next year there will be more people here.”

When asked why people should pay attention to independently published works, Corby had this to say: