Students wandering Youngstown State University in the evening hours may encounter a campus cat. The cat is a feline of many faces. From striped, to sooty grey, to bright orange, cats of many shapes and sizes have been the campus cat for one student or another.

Concerned students like Max Klauscher decided to take in a campus cat and care for her with his girlfriend, Morgan Frederick. A white, spotted kitten, only five to seven weeks old when she was discovered, Artemis has been living with Frederick.

“I found Artemis outside of Bliss Hall on Oct. 18,” Klauscher said, “She was in the rocky landscaping next to the stairs that lead to the parking garage.”

The couple took Artemis to the vet. Many stray or feral cats are exposed to several diseases in the wild. However, the veterinarian said Artemis is a healthy, young cat.

“She’s very rambunctious, super high-energy,” Klauscher said. “Her name is very fitting because Artemis is the Greek goddess of the hunt and our kitten is a tiny, killing machine, or at least she thinks so.” 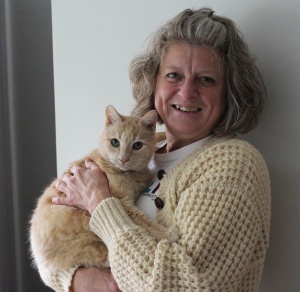 Students like Klauscher and Frederick play a small, but key role in the ongoing effort to manage feral cats in the city. In the spring, when unneutered cats go into heat, the feral cat population explodes. Youngstown may not be an exception to the severity of the feral cat problem.

Adopting helps reduce the chances of the population growing, but most people are not prepared to take them in. There are humane alternatives to adopting, however.

“Until last summer, we did not know about such programs,” Considine said. “We contacted local animal activist and TNR expert Jason Cooke to assist us.”

The universal sign of a TNR cat is a docked left ear tip. These cats usually have some form of caretaker to provide food and monitor the cat’s condition. Students wishing to take action to address the feral cat population here on campus can reach out to Angels for Animals [AFA].

“AFA has specials a few times a year,” Considine said. “If you bring in the mama, they will fix the kittens for a reduced or free charge.”

Students still wishing to adopt need to be aware of certain factors before even placing a dish of food out. One of the most important is the difference between a true feral and a stray or mistreated cat. A local animal caretaker, Sue Sexton, said the key differences depend on how they approach things, such as food.

“With a feral cat, you can hear low growls,” Sexton said. “You can put a dish of food out and you can see this cat, who’s clearly starving, and it won’t approach that food until you’re out of the area.”

She said a feral cat does not need rescued. Students should not worry about the animals’ surviving the winter as many are capable of caring for themselves. Leaving food out or building a small shelter requires a commitment to the feral cat community depending on those resources.

Students leaving for the summer or are already under financial duress might struggle to maintain the commitment. However, Sexton said puncture wounds from a cat’s bite can cause a host of dangerous infections and should be quickly washed, or the victim risks a trip to the emergency room.

After one has successfully rescued a cat that isn’t a true feral, Sexton said the next, potentially difficult step is checking to see whether or not the cat has certain types of diseases which may necessitate euthanasia.

Sexton said feline leukemia and feline AIDS are the most common conditions to be checked for if the cat is going to be interacting with another cat.