A trio of losses in the Sanford Pentagon Showcase has sent the Youngstown State University men’s basketball team searching for answers. YSU has yet to beat a Division I team through seven games played.

After a grueling road trip came up empty for the Penguins, YSU Head Coach Jerrod Calhoun stated that each game had its own storyline for what went wrong. The most recurring story seemed to be the poor free throw shooting of YSU.

“That’s tough because you want to get to the free throw line and you tell your kids to drive the ball and that’s the name of the game,” Calhoun said.

Youngstown State is ranked 348 out of 351 teams in free throw shooting with a .569 percentage. Freshman Naz Bohannon, expressed his frustrations over their shooting woes from the line.

“If we need to stay after practice and shoot until we make at least 300-400 free throws then that’s what we need to do because we can’t keep losing games off free throws,” Bohannon said. 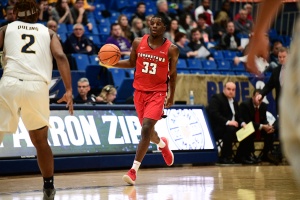 In their first of three neutral site games, YSU faced off against a Northern Colorado team led by Jordan Davis and Jalen Sanders. The Bears came out strong managing to secure a 80-67 win.

As mentioned, Coach Calhoun said each game had a story. The story in this loss? Missed three pointers and a low team free throw shooting effort. The Penguins managed to only shoot 28.6 from three on 4-14 attempts. From the line, it didn’t fare much better as YSU shot 9-23 only managing a 39.1 percent shooting effort in free throws.

“To miss so many [free throws] and to know the number of misses are more than the points we lost by is gut wrenching,” Bohannon said.

Though the Penguin offense came into the game averaging 97 points a game, the Bears slowed YSU holding them to just 67 points on 42.2 shooting. By contrast, Northern Colorado shot 57.6 from the field as they controlled the game from start to finish having never trailed.

YSU fared better in game two of the showcase despite a 71-64 loss to the Golden Eagles.  Both teams were coming off a loss in their first showcase games as they battled it out in a closely contested game.

After leading the game in scoring with 24 points, Morse became the 12th player in school history to reach 1,500 points.

The storyline in this game was turnovers with the Penguins turning the ball over 18 times. In return, the Golden Eagles managed to convert those turnovers into 20 points.

Despite the USM defense forcing YSU to shoot just 37.7 from the field, both teams stayed close throughout the game. YSU led most of the first half behind Morse scoring 13 first-half points.

The game was back and forth in the second half with YSU battling back twice to tie before USM players Cortez Edwards and Tyree Griffin helped secure the win.

Closing out the Sanford Showcase, YSU dropped a blowout 81-53 matchup against the Coyotes. The Penguins shooting woes continued in this game shooting 37.7 percent from the field.

Morse was the leading man for YSU with 12 points and five assists. He averaged 17.7 points per game over the three games en route to being named to the Sanford Pentagon Showcase All-Tournament Team.

The hot-shooting Coyotes connected on over 50 percent of its field goals and managed to convert 19 turnovers into points despite having 16 of its own. South Dakota ran away with the game by never trailing.

After the game, Calhoun praised South Dakota, calling them the best team they’ve played so far on the season. Coming off three loses, YSU looks to regroup at home this week.

Youngstown State will host Robert Morris on Nov. 29 in Beeghly Center with tipoff set for 7:00 p.m. before having five straight road games in the month of December.