Chants of “Science not silence” rang out in Wick Park during Youngstown’s March for Science on Saturday, where experts and educators spoke about the importance of science and caring for the environment. 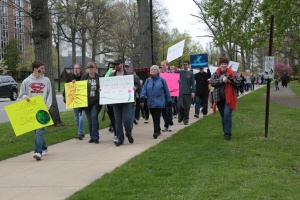 About 200 Youngstown community members showed their support for scientific research funding, science education and stopping climate change as they marched around the park and carried signs with slogans such as “There is no Planet B”.

The Youngstown march was one of about 610 satellite marches that broke out on Earth Day, according to marchforscience.com. The primary March for Science was held in Washington D.C., and featured speakers such as science educator Bill Nye.

The protests were in response to President Donald Trump’s administration cutting the budget for national scientific departments such as the Environmental Protection Agency and the National Aeronautic Space Administration.

The march showed support for a variety of disciplines under the umbrella of “science”, including biological, environmental and social science.

Speakers talked primarily about climate change and how advancements in science have increased quality of life, and explained why the budget cuts are harmful.

Alexis Smith, radiologist at Trinity Health System, worked with the Mahoning Valley Voices for Change and Progress Mahoning Valley to organize the Youngstown march after noticing the traction the national March for Science was gaining on social media.

“I think coming together helped us after the election. We are really worried about science and the way things are going with the administration so I think being active like this has helped us feel better because we are doing something,” Smith said.

Patricia Dunbar, environmental specialist at the Ohio EPA, advised people to start making calls to elected officials about the budget cuts and to attend community events that take action against the cuts.

“We have to keep the administration straight, because they work for us — we the people,” she said. “We want a healthy environment. That’s what we must tell them: we won’t settle for anything less than taking care of our planet.

The advancement of medical science, such as vaccinations, has saved countless lives, Smith said. She said she is concerned that cutting the budget towards science research will prevent cures for diseases and other important discoveries from being made.

“We want people to be more aware of what science has done for them,” Smith said. “The march is non-partisan, but we also want to focus on the fact that we think the best available science and research should be used when making decisions about policies on the state, federal and local government levels.”

“How could anyone accept and support the removal of the accomplishments that the advances of science have given us? Science provides answers to all of our questions and it always will,” Dunbar said.

Dunbar talked about the bleaching of the coral reefs, increasing ocean acidity and the rising sea levels, and explained that climate change is apparent because of the extreme weather changes.

Jessica Morris, a YSU alumna who gave a speech about wildlife conservation, said more people need to get involved with events such as the science march because if things remain stagnant, then there will be more deforestation and the air quality will worsen.

Mandy Fehlbaum, YSU sociology professor, spoke to the crowd about social sciences, including anthropology, psychology and sociology. She said she is concerned about budget cuts to science.

“The danger of people not being educated about social science is that it makes people closed minded. I think it’s important for people to come to the march and celebrate a passion for science,” she said.

Fehlbaum said it’s important to distinguish the real facts from “alternate facts” and to do research on policies and ideas before supporting them.

“Research is under attack now more than ever. Thank you for reminding our elected leaders, our neighbors and even yourselves of the important role that evidence plays in informing policies and forming a better world,” she said.

Smith said the march is the start of a campaign, and “days of action” will be posted on the March for Science website.