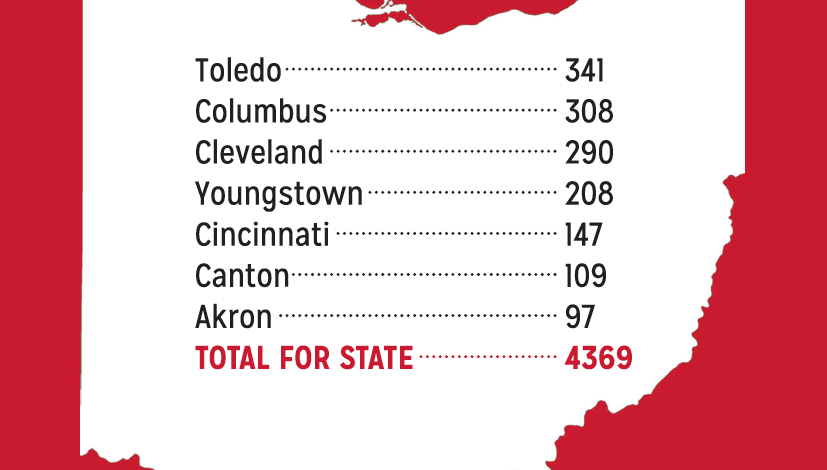 According to statistics from Ohio’s State Fire Marshall, Youngstown suffered nearly twice as many structural arsons as its similarly-sized neighbors, Akron and Canton, even topping the much larger city of Cincinnati.

Youngstown was fourth in the state for number of structural arsons in 2013.

The great number of arsons in the area can be explained through a variety of variables. Alvin Ware, Youngstown’s Chief Fire Investigator, cites the number of vacant houses as a leading factor.

“Our arson figures are kind of high right now because of all the vacant houses we have. Some of the other cities in Ohio get the same problem: Toledo, Cleveland, all the big cities,” Ware said.

Of Youngstown’s 208 structural arsons, 162 were vacant houses. These abandoned homes are often utilized for criminal purposes, often playing host to crimes such as drug dealing or production.

“The greatest spike we are seeing right now is in crime concealment fires that conceal a previous incident such as a burglary, homicide or theft of copper,” Hobbs said.

Hobbs asserted that setting fire to a crime scene is not as effective in covering up evidence as it was in years past due to advances in forensic science, though it hasn’t stopped criminals from trying.

Ware and Hobbs both point to the theft of copper as a large motivator for arsonists. Buildings, particularly older ones, often contain significant amounts of copper in their construction. This copper is often stripped for its resale value. This is especially prevalent in poorer economic areas such as Youngstown and Toledo.

Sometimes abandoned buildings are burned down in advance to make the copper easier to retrieve from the rubble later.

Hobbs believes that most of the arsons are done with a purpose. He believes that the stereotype of the pyromaniac is overrepresented.

“Investigating the habitual fire-setter, the prototypical arsonist, is a small portion of what we see. They do exist. Every year, somewhere in the state, we have a few of them, but what we see a lot of now are fires of retribution, often times either drug-related or domestic violence-related,” Hobbs said. “These are often times the only time that person has set a fire.”

Ware and Hobbs both cite gang violence as another factor in the number of arsons.

Additionally, some arsonists even have altruistic motives in their fire setting.

“We see a lot of fires set to buildings that have been proclaimed community eyesores or fires that someone set just to get rid of the building because it’s inhabited by drug dealers or vagrants or they believe it poses a public health risk,” Hobbs said.

This is unfortunate though, as the fires can still be dangerous since the vacant building may contain homeless residents. The risk of the fire spreading to neighboring houses in tightly-packed neighborhoods is also present.

“Multiple injuries in the fire department have come from fighting vacant house fires, and it’s a drain on our manpower and our trucks,” Ware said.

Hobbs has witnessed arson rates fluctuate largely with the economy and the drug trade. He’s seen noticeable declines in areas where drugs have been cleaned off the streets, and where the economy has bounced back.

If Youngstown can continue to drop the rates of blight and crime, then the trends suggest that incidents of arson will fall as well.